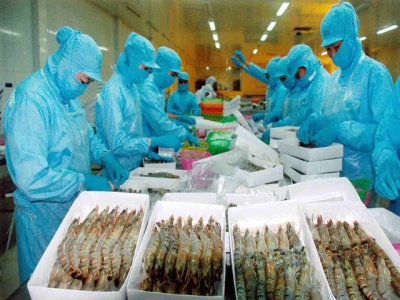 Vietnam has emerged as the fourth-largest seafood exporter to Japan, with its products making up 7% of Japan’s total seafood imports in January 2021, an increase of 0.4% compared to data a year earlier, according to figures released by the Ministry of Industry and Trade.

Japan Customs statistics indicate that the Far East nation imported a total of 165,030 tonnes of seafood worth $997.9 million in January, representing a decline of 4.8% in volume and 16.9% in value against January 2020.

Japan moved to increase imports of tuna and fish eggs while their import of shrimp, squid, and octopus endured a downward trajectory compared to the same period from last year.

January also witnessed Vietnam join the likes of China, Chile, Norway, and Thailand as the largest seafood exporters to the Japanese market, of which it represented its fourth-biggest seafood supplier in January.

The country shipped 11,400 tonnes of seafood products worth a total of $85.5 million to Japan, representing a rise of 0.3% in volume and a drop of 14.1% in value against the same period from last year, according to VOV.

The General Statistics Office (GSO) stated that the Japanese market imported 4,900 tonnes of shrimp worth $42.6 million in January, up 25.6% in volume and 22.7% in value, thereby making it the largest consumer of Vietnamese shrimp.

To penetrate deep into the demanding market, the Vietnam Trade Office in Japan has advised Vietnamese businesses to strictly abide by aquaculture breeding procedures, especially the rules of antibiotic residues.

The Vietnam Association of Seafood Exporters and Producers (VASEP) has forecast that seafood exports will hit $8.8 billion this year, a year-on-year increase of 5 percent.

However, the main importers of Vietnamese seafood such as the EU, China, South Korea, and Japan only slightly decreased their imports from Vietnam by 3 to 6 percent, while the largest market, the US, still increased significantly at 10 percent.

Other markets like Russia, the UK, Australia, and Canada even hiked by 10-32 percent, Vietnamnews reported.

Vietnamese seafood exports fell sharply by 10 percent and 7 percent in the first quarter and second quarter of last year respectively, but from the third quarter began to recover.

The country's seafood output was estimated at 8.4 million tonnes by the end of last year, a slight increase of 3 percent compared to 2019.

Entering the new year, VASEP believed the fisheries trade situation was still strongly affected by the pandemic, even though this was still the main factor that dominated seafood exports and imports in Vietnam.

However, Vietnam was still able to maintain a competitive advantage in raw material supply compared to other countries. In addition, free trade agreements would continue to be a lever for its seafood exports to recover in some markets, said VASEP.

Enterprises would also have more experience and flexibility to adapt to fluctuations and changes in the needs and tastes of the market after a year of the pandemic, it added.

On the stock market, seafood exporting enterprises had a tough year due to the pandemic.

Cuu Long Fish Joint Stock Company was one such impacted seafood enterprise, with revenue and profit last year decreasing by 49 percent and 80 percent respectively compared to 2019.