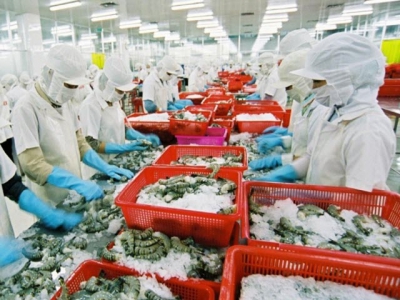 Major players include the likes of Thuan Phuoc Seafood & Trading Corp., the Minh Phu Seafood Corp., and the Nha Trang Seafood Company, which have stepped up expansion efforts since the beginning of the year, all of which are taking place in the Mekong Delta.

Thuan Phuoc opened its 17.45 An An shrimp processing plant  worth  a total of US$17.45 million in Tien Giang province, with the site featuring a capacity of approximately 50 tonnes of finished shrimp products each day.

Elsewhere, Minh Phu is preparing to start construction on two large-scale processing plants, at a cost of roughly VND1 trillion and with a combined annual capacity close to 50,000 tonnes, in Hau Giang and Ca Mau provinces. The corporation is also in the process of eyeing the construction of another factory in nearby Kien Giang province.

Furthermore, Nha Trang Seafood is also putting the final touches on a processing plant in Bac Lieu province which is set to be capable of producing 10,000 tonnes of products each year.

A draft fishery development strategy towards 2030 with a vision to 2045, developed by the Ministry of Agriculture and Rural Development, is aiming for the sector to contribute between 28% to 30% of national GDP by 2030. Indeed, aquatic output is set to reach 10 million tonnes, of which aquaculture output will account for 70% to 75%. This will serve as a driving force for local firms to invest in expanding raw material farming areas.

At the “Dialogue 2045” programme chaired by Prime Minister Nguyen Xuan Phuc in early March, Le Van Quang, director general of Minh Phu Seafood, said that to ensure sustainable material sources, his firm has devised a plan relating to smart and green value chain development. This consists of different shrimp farming models which are suitable to different localities, whilst the enterprise has also developed an AI- and blockchain-based mobile phone app which can be used to manage shrimp farms.

Through the development of sustainable shrimp production models, Quang believes the country will be capable of becoming the world’s leading shrimp production and processing powerhouse, holding a market share of 25% globally whilst producing nearly 4 million tonnes of raw shrimp by 2045.

Having posted double-digit growth last year despite COVID-19 and with opportunities stemming from new-generation free trade agreements, many shrimp enterprises