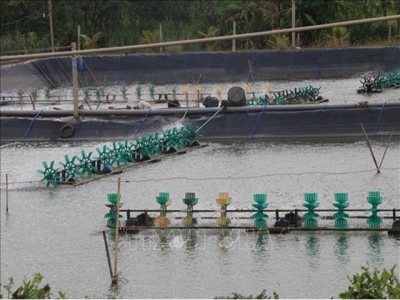 Located in the downstream area of the Tien River, the two localities aim to produce over 50,000 tonnes of aquatic products for domestic consumption and export.

Head of the Go Cong Dong office for agriculture and rural development Nguyen Van Qui said the district is endowed with a 20-km coastline and so boasts great potential for salty and brackish water aquaculture. It has so far established two concentrated farming areas.

The district is now working to diversify its farming methods to meet market demand and lessen the risks facing farmers.

To boost agricultural production restructuring efforts and to capitalise on potential in local land and labour, particularly for salty and brackish water aquaculture, the locality has developed high-tech shrimp farming for export in Phu Thanh and Phu Dong communes, while building a shrimp-rice farming area in Phu Tan, according to Nguyen Van Hai, head of the district’s office for agriculture and rural development.

Having posted double-digit growth last year despite COVID-19 and with opportunities stemming from new-generation free trade agreements, many shrimp enterprises