The truth about pest-resistant rice varieties 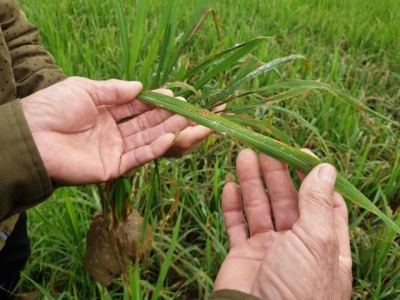 Nghe An has never heard of any rice variety marked with 'blast and blight resistant' that did not truly get sick.

Blast disease is dangerous and frequently appears during winter-spring crops in the North. Photo: VAN.

In the past few years, many seed production and trading companies when introducing varieties on mass media, said that rice varieties A and rice varieties B were resistant to diseases this or that. Listeners, especially farmers, trusted them wholly at first, but after only 1-2 crops, it turned out that what the companies said was real, but not that real!

Stories of varieties once considered pest-resistant

More than 15 years ago, the Plant Protection Institute imported a rice variety called IR1820 from the International Rice Research Institute (IRRI) to have it planted in Vietnam. This rice variety was introduced to possess absolute resistance to blast disease. Nghe An, being the cradle of rice blast disease, hastily put this rice variety into cultivation on a rather large scale.

In the first and second crops, the variety showed true resistance to blast disease. However, in the third, fourth crops and so on, the resistance level gradually decreased the resistance was almost nowhere to be found, and the infection started getting worse in the later crops.

After the IR1820 rice variety, the CR203 rice variety was also introduced as a very good resistant rice variety. This rice variety has the advantage of being short-term, so it is suitable for short-term spring rice (late spring) and summer-autumn crop. Nghe An quickly took the opportunity to expand the large-scale cultivation area.

The first two to three production crops have not shown any signs of rice hopper infestation. But after the production, the infection gradually became clear. And later on, the level of rice infested with planthoppers that caused rice fire became worse, to the point that they had to be abandoned to replace other rice varieties.

After IR1820, CR203 was also introduced to the public as a very good resistant rice variety. This rice variety had its characteristics suitable for short-term spring, late spring, and summer-autumn crops. Nghe An quickly took the opportunity and conducted large-scale cultivation for CR203.

The first two to three crops showed no signs of rice hopper infestation. But in the later crops, the infection gradually became evident and worsened to the point that they had to discard and replace it with other rice varieties.

“Capable of resisting” is more acceptable

The stories of the past still linger to the present day as some rice varieties, both purebred and hybrid, are advertised as resistant to blight (Bac Thom 7, BC15, LT2 – KBL) and blast disease (BC15, MTL547, VTC16, TBR225).

But reality speaks otherwise. Nghe An has never met a rice variety marked with “blast and blight resistant” that did not truly get sick. Even in the current 2002 spring crop, Nghe An has recorded over 1,000 ha of rice infected with blast disease which is heavily concentrated in varieties like BC15 and TBR 225.

The term “absolute resistant” now seems inaccurate. “Capable of resisting” is more acceptable. This is both practical, reasonable, and does not cause distrust within farmers.Farmers should implement the following measures well to increase the resistance to pests and diseases on rice crops. can also be applied to other crops.

1. Only high quality rice varieties should be used. Seeds must be of certified quality level or higher. Other crops should also be planted using selected or restored seeds and seedlings to increase vitality and resistance. It is not advisable to take the same crop that has been cultivated through many years because the vitality will certainly drop and resistance to adverse conditions will be poor, specifically resistance to pests and diseases will be extremely weakened.

2. Crops in general and rice in particular should not be sown or planted too thickly, which is seed-consuming and thus unnecessarily increases production costs, not to mention creating a suitable environment for pests to arise and thrive. The more densely the rice plants are planted, the more they create their own "microclimate" right on that field, which will lead to opportunities for pests and diseases, such as planthoppers, fungal blasts, and powdery mildew to develop.

Organic oranges purchased in the orchard of Ham Yen district (Tuyen Quang) can be up to VND 28,000/kg, which is a record high in the past ten years.