Price of black gold reversed due to difficulties in its exports 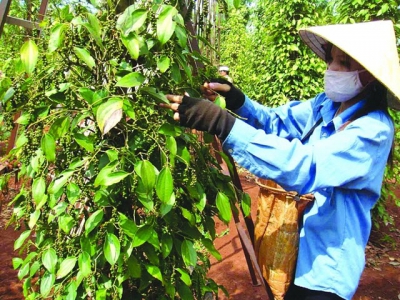 After increasing in the first quarter of 2021, the price of Vietnamese pepper has decreased since the beginning of April. It is forecasted that in the next few months, pepper prices will continue to fall due to the abundant supply and low delivery pressure.

According to the Import and Export Department (Ministry of Industry and Trade), from the beginning of the year to the end of March 2021, pepper exports were estimated at 60,000 tonnes, worth US$174 million, down 25% in volume and 1.4% in value from the same period in 2020. The average pepper export price in March was estimated at US$2,867 per tonne, down 1.1% compared to February 2021, but up sharply by 38.6% compared to March 2020. In the first quarter, the average export price of pepper reached US$2,879 per tonne, an increase of 31.5% over the same period last year.

According to the Vietnam Pepper Association (VPA), in the first quarter of 2021, Vietnamese firms imported 8,143 tonnes of pepper from several markets, up 5.8% from the same period last year. In which, black pepper was imported 5,731 tonnes, and white pepper was 2,412 tonnes. Indonesia and Brazil are the two largest pepper exporting countries to Vietnam, accounting for 81.8% of total imports. Notably, the official import volume of pepper from Cambodia increased to 238.5%, reaching 606 tonnes.

Statistics showed in the first months of the year, exports of black and white pepper decreased compared to the same period in 2020, but exports of ground black pepper and ground white pepper increased sharply. “Thus, the structure of export pepper types has changed dramatically. Firms reduce the export of raw pepper, replaced by processed products,” said a representative of the Import and Export Department.

As one of Vietnam’s leading pepper exporters, Phuc Sinh Group has faced many difficulties in exporting, especially the high logistics costs since the beginning of the year.

Phan Minh Thong, Chairman of the Board of Directors of Phuc Sinh Group, said rising costs took 70% of the enterprise’s profits, seriously affecting their business. Meanwhile, containers were also not available for shipping. “We could export 10 containers per day before, but now there are only two units to be exported. At the present time, even when the Suez Canal has been freed, container ships are still waiting in line to go," said Thong.

Prices continue to decline in May and June

According to the Import and Export Department, in early April, pepper prices were stable in major producing countries such as Vietnam, Brazil, and Malaysia, but increased in India and Indonesia. The global pepper prices have slowed down after rising sharply in the previous time. In the future, pepper prices are set to decrease as many countries will expand the scale of social distancing due to the COVID-19 pandemic, leading to a decrease in consumption demand.

The domestic pepper price also decreased in early April. In addition to firms delaying the delivery due to an incident in the Suez Canal, the decrease in imports from China caused this situation. According to the Import and Export Department, on April 9, 2021, domestic black pepper prices fell by 1.3-2% in most production areas, but they stabilised in Dong Nai, reached VND70,000 - 74,000/kg. The price of white pepper was VND108,000/kg, down VND1,000/kg compared to the end of March, but much higher than VND57,000/kg in the same period in 2020.

Difficulties in logistics and falling pepper prices have led to a new trend among the population as well as speculators in contrast to the situation a month ago. It was promoting the sale of pepper instead of waiting for the price to increase.

Thong said: "Someone wanted to sell 500 - 1,000 tonnes of pepper, but Phuc Sinh’s purchasing ability is only about 50-200 tonnes because it cannot be shipped. Everything is stressful. The price is higher, and buyers are less. The goods are full of stock but we cannot export it.” The leader of Phuc Sinh Group said in May and June, pepper prices would continuously drop, reaching about VND60,000 - 65,000/kg due to low delivery pressure. Moreover, July and August is the pepper harvest season of Indonesia and Brazil, which will make pepper more plentiful.

"The sustainable development of pepper production is an indispensable requirement for Vietnamese partners to feel more secure about the quality of Vietnamese pepper," said Hai.

Since early morning, Nguyen Van Dung of Khe Goi hamlet in Ninh Binh province has been tending the family’s 4 ha of pineapples on the hill behind his house.

The price of pepper, known as black gold, is increasing sharply. However, Vietnam’s pepper growers are not sure how long the price will be maintained.