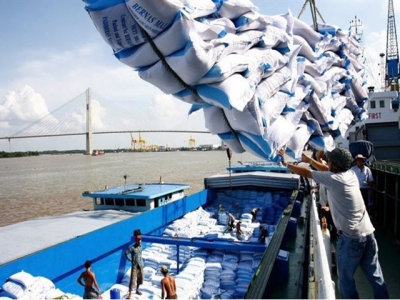 HÀ NỘI — In order to take advantage of FTAs ​​and increase the Vietnamese rice export market share at more competitive prices, the Ministry of Industry and Trade will continue to co-ordinate with ministries, branches and the Việt Nam Food Association to help businesses effectively implement the deals and make the most of markets such as South Korea and the EU.

The ministry would implement solutions on mechanisms and policies to remove technical and trade barriers, internalise international commitments, customs procedures, logistics and credit as well as building and developing brands to create a premise for rice export enterprises to exploit the markets, said Trần Quốc Toản, deputy director of the Import and Export Department under the Ministry of Industry and Trade.

For rice exporters as well as farmers, Toản noted the need to be more proactive in improving the competitiveness of products through quality and price as well as building and protecting trade to diversify markets towards sustainable exports.

The Ministry of Agriculture and Rural Development reported the volume of rice exported reached 450,000 tonnes with a value of US$246 million last month.

The cumulative amount of rice exported in the first three months of this year rose 1.1 million tonnes, while the value hit $606 million, down 30.4 per cent in volume and 17.4 per cent in value over the same period last year.

Nguyễn Văn Đôn, director of Việt Hưng Co., Ltd in the Cửu Long (Mekong) Delta province of Tiền Giang, said that the reason for the decline in rice exports was partly as the first quarter of this year coincided with the Lunar New Year holiday.

In addition, the first two months of the year were between-crop periods when the rice supply was limited while the price was high, so it was difficult for businesses to negotiate export contracts.

Although the company's rice export volume declined by more than 30 per cent over the same period for the first three months of the year, the export rice price rose by about 20 per cent. The two largest import markets are still the Philippines and China.

“Customers still need to import, but enterprises cannot order containers to pack their goods, the shortage of empty containers has pushed freight rates up 600-700 per cent, from $1,000 to $6,000-7,000 per container. With this rate, not only rice exporters but also other firms are facing difficulties. This situation means the importer had to consider delaying the time of receiving the goods or looking for closer sources to reduce costs,” said Bình.

Commenting on this issue, Toản said that although the amount of rice exported in the first quarter of this year declined compared to the same period last year, the price of rice for export grew due to high demand for food reserves around the world, which has pushed up the general level of world rice prices.

Việt Nam's rice price continued to remain at a high level of $547 per tonne by the end of the first quarter of this year, up 18.6 per cent, equivalent to an increase of $86 per ton compared to the same period last year. The current price of rice has been and is benefiting the rice farmers.

Vietnamese rice exporters were increasingly focusing on improving quality and traceability to meet the strict standards of export markets such as the EU, South Korea, and the US, Toản said.

Vietnam aims to be world's top exporter of quality rice

In August 2020, when the Vietnam - EU Free Trade Agreement (EVFTA) took effect, Trung An High-tech Agriculture JSC exported about 150 tons of rice to the Europe

Farm economic models in agricultural production have been continuously developed. The development of farm economy has helped farmers bring into full play