Lessons learned from the ups and downs of Vietnams black gold 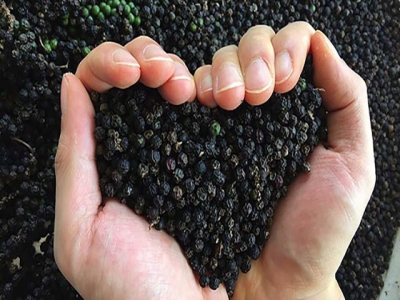 The price of pepper, known as black gold, is increasing sharply. However, Vietnam’s pepper growers are not sure how long the price will be maintained.

Unlike others, pepper farmer Nguyen Tan Cong from Dak Doa district in the Central Highlands province of Gia Lai was calm before the price fever. For many years, even when the pepper crisis occurred, his pepper price was always sky-high.

The secret was that Cong did not grow pepper like most farmers in the region. He planted pepper of high quality, using organic farming techniques, and created his own branding.

In 2016, when the pepper price was at its peak of more than VND200,000 per kilo, people rushed to grow pepper. They gave up natural farming methods to switch to chemical fertilizers and pesticides. Consequently, pests were widespread, many pepper gardens were wiped out, many farming households went bankrupt, and the proportion of returned pepper export consignments increased. After that, pepper prices plummeted due to oversupply, and Vietnam's pepper industry was in turmoil.

In that circumstance, Cong gathered people who preferred clean agriculture and set up a cooperative to find new directions and learn about organic farming models.

“A few days ago, my pepper processing plant with a capacity of 1 ton per hour was put into operation. Our processed products will be exported to the US and Europe,” Cong told VietNamNet.

Similarly, since its establishment, Lam San Agricultural Cooperative in the southern province of Dong Nai, has encouraged farmers to produce clean pepper and develop sustainable raw material areas. The cooperative currently has about 1,600 hectares of pepper that meet safety standards and about 300ha of organic pepper.

Since 2020, the cooperative has invested in a plant to process pepper products for export, with the value 50% higher than the export price of black pepper.

Mr. Hoang Phuoc Binh, vice chairman of Chu Se Pepper Association in Gia Lai Province, said that over the past 20 years, Vietnamese pepper has always ranked first in the world in terms of productivity and export turnover. In 2020, Vietnam’s pepper exports accounted for 60% of the world market.

However, Vietnam’s pepper growers have suffered from an unprecedented price crisis in recent years.

In 2015, the pepper price hit its peak, bringing Vietnamese pepper to its historic heyday. In late 2016, pepper prices started to fall and in 2020 fell to the bottom, at only VND35,000 per kilo, while the production price was up to VND60,000 per kilo. Farmers suffered heavy losses and were exhausted.

According to Binh, pepper is currently entering a new bull price cycle. However, looking back at the recent crisis, Vietnam needs to develop pepper in a more sustainable way. The most important solution is to reorganize production and build a value chain.

The world market is huge, but standards have changed. Customers are more demanding of quality. The traditional way of farming will no longer be appropriate. In organizing chain production, farmers will participate in cooperatives where they will learn how to produce pepper to international standards.

Binh said that pepper is now not only used as food but also for the production of cosmetics, perfume, medicine and other items. The demand for pepper as a secondary material for other industries is great but high standards are required.

The only way to produce organic pepper is to build chain linkages to go to the world. This is also the common path for Vietnam's agricultural products in general, not just pepper, Binh said.

Mr. Phan Minh Thong, general director of a big pepper exporting firm, said the problem of the Vietnamese pepper industry is growing pepper without proper orientation and control. In 2020, Vietnam only needed about 50,000 hectares of pepper, but in 2014-2015, it already had 200,000 hectares. Oversupply and quality results in low prices.

Thong said that in order to add added value to pepper, Vietnamese enterprises must change and join a clean production chain. Otherwise, it will be difficult to survive in global competition.

Deputy Minister of Agriculture and Rural Development Le Quoc Doanh said that in the coming time, Vietnam will focus on improving the quality of pepper production, processing and trade. Instead of planting pepper according to the traditional method, Vietnamese pepper must be cultivated under VietGap criteria to improve quality and meet the requirements of importers.

Thong suggested reducing pepper production by half and focusing on organic and quality pepper. Then, within a year, pepper prices could increase from $2,500 per ton to $7,000 or $8,000 per ton.

More specifically, agricultural experts said that it is necessary to take into account new generation products with Vietnamese pepper in the international market; for example, aromatherapy from Vietnamese pepper.

Vietnam is the world's largest pepper producer and exporter. Pepper trees provide a livelihood for nearly 200,000 farmers in the Central Highlands and the South. In 2020, Vietnam's pepper exports reached 288,000 tons, earning $665 million. Up to 95% of the country's pepper output is for export, while only 5% is for domestic consumption. However, Vietnam mainly exports raw pepper at a low price.

Farm economic models in agricultural production have been continuously developed. The development of farm economy has helped farmers bring into full play

Since early morning, Nguyen Van Dung of Khe Goi hamlet in Ninh Binh province has been tending the family’s 4 ha of pineapples on the hill behind his house.