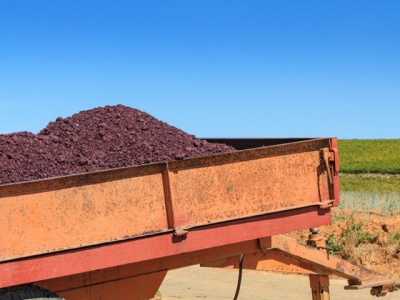 An international team of researchers from Canada and South Africa explored the use of fruit by-products as an alternative fiber source to what bran in the diets of feedlot cattle.

“The objectives of the present study were to compare the effects of feeding 150 g/kg DM of DCP [dried citrus pulp] or DGP [dried grape pomace] as alternate fiber sources to wheat bran on growth, carcass attributes, beef quality and costs of production,” ​the researchers said.

They found that adding either dried citrus pulp (DCP) or dried grape pomace (DGP) improved cattle average daily gain and live weight, compared to use of the control diet.

Steer receiving diets with grape pomace had improved dry matter intake, along with both warm and cold carcass weights compared to cattle eating a diet with DCP or the control feed, they said. Income over feed costs and shear force were highest for cattle on the DGP diet.

“These findings suggest that the DGP diet compared to the DCP diet represents an economic advantage for beef producers as a fiber substitute for wheat bran in beef cattle finisher diets,” ​the researchers said. “Future studies are thus warranted to compare the effects of feeding DCP and DGP as fiber sources in cattle finishing diets on beef shelf life, fatty acid profiles, sensory quality and volatile and flavor compounds.”​

In South Africa, feedlot production generates more than 80% of the beef in the “formal beef value chain,”​ researchers said.

However, the production system is not meeting its full potential because producers face a limited supply of feed ingredients, they said. The scarcity leads to high prices and reduced profitability for producers.

“To optimize feed shortages and profits for the feedlot industry it is, therefore, important to explore alternative and underutilized feed resources, especially non-conventional resources such as fruit by-products, which are produced in large quantities but not used for human food,” ​they said.

Citrus and grape crops are major crops and generate about 2.9m and 2m metric tons on an annual basis, respectively, the researchers said. However, the industries generate large amounts of waste in the forms of citrus pulp and grape pomace.

Respectively, about 225,000 and 280,000 metric tons are produced annually, they said. Analyses of dried citrus pulp (DCP) and dried grape pomace (DGP) show that they may be usable as fiber-rich feed ingredients for ruminant diets.

Citrus pulp includes water-soluble sugars and pectin and grape pomace has high levels of ether extract and linoleic acid, they said. “The average metabolizable energy levels of DCP and DGP are generally close to the recommended range of metabolizable energy (12.2 ± 2.0 MJ/kg average daily gain) requirements for growth of cattle,”​ they added.

There are challenges using either by-product while it is fresh because of high water activity and proanthocyanidin levels, the researchers said. However, both can be reduced by drying the ingredients.

In feeding trials with sheep, DCP and DGP have had either positive or neutral influences on sheep growth, meat quality attributes and carcass compared to results from diets incorporating maize bran, soybean hulls, wheat bran and straw. But there is little information regarding the ingredients used in feedlot cattle diets and no data available regarding their influence on carcass traits or beef quality, they said.

Costs for both DCP and DGP tend to be lower than wheat bran, which is commonly used as a high-fiber ingredient in beef cattle finishing diets, they said.

“It is hypothesized that DCP and DGP would have equivalent or better feeding value compared to wheat bran, and superior economic value due to differences in costs."​

During the feeding trial, 24, 7-month-old cattle received one of three diets for 90 days, following a 21-day adaptation period, the researchers said. Dried citrus pulp was purchased, and grape pomace was collected from several regional wineries and dried – both were milled before being used in feed.

“Although DCP and DGP were used as fiber substitutes for wheat bran, their content of other nutrients also differed,” ​the researchers said. “Diets were, therefore, balanced for crude protein (CP) and metabolizable energy (ME) for an estimated ADG of 0.2 g/g and 12 kJ/g DM, respectively.”​

Cattle were weighed at the start of the feeding trial, in 14-day intervals and before slaughter, feed offered and refused was recorded daily to establish dry matter intake (DMI), and diet samples were gathered weekly, they said. The average daily gain was calculated.

At the end of the feeding trial, cattle were slaughtered, and both hot and cold carcass weight and pH were noted, they said. Carcass fatness and conformation were categorized while dressing percentage was calculated.

Overall, steer on the DGP diet saw greater dry matter intake compared to cattle on either the DCP or control diets, the researchers said. While cattle on both the DGP and DCP diets had improved average daily gain and final live weights compared to those on the control diet.

Cattle receiving diets with DGP had heavier hot and cold carcasses than those on the other diets and had higher dressing percentages than cattle eating a diet with DCP, they said. However, feed efficiency, carcass pH and temperature were not altered by the feed.

However, the feeds did not significantly alter moisture, ash, intramuscular fat, crude protein levels or meat lightness, redness, yellowness, hue and chroma, they said. Drip and cooking loss were similar for all diets.

Cattle on the DGP diet had the highest shear force, followed by cattle eating the DCP diet and control diet, they said.

Research shows degree of inbreeding depression higher for dairy cattle with more recent ancestors versus multiple generations in the past.

Precision feeding can take the sting out of a drought, according to Dr Chris Landman, a feed specialist and consultant. Roelof Bezuidenhout reports.