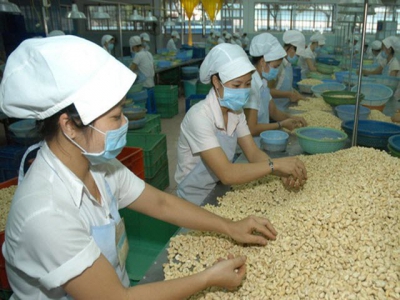 In the first six months of this year, cashew enterprises have exported more than 232,400 tons of cashew nuts with export turnover of above US$1.5 billion, up 16.2 percent in volume and 1 percent in value compared to the same period last year. With such good results, concerns over the impacts of the Covid-19 pandemic on the cashew industry have changed swiftly from pessimism to optimism. Experts said that Vietnam’s agricultural products still have lots of export potential in European countries as they are favored by consumers, especially cashew nuts, which are good for health and support the treatment of cardiovascular diseases and diabetes.

Mr. Dang Hoang Giang said that some businesses, such as BLB Group and Intersnack Group had come to Vietnam early, looking for opportunities to invest or establish a joint venture to open cashew processing factories and export processed cashew nuts to Europe to wait in front the EVFTA. The advantages of advanced technology and technique of EU enterprises are the opportunity for Vietnamese cashew enterprises to boldly approach and buy advanced cashew processing technological systems and equipment at cheaper prices but of higher quality. At the same time, it helps to complete and supplement domestic production equipment in stages, such as pasteurization lines, organic fumigation, and roasting. Therefore, it can help to improve the competitiveness of Vietnamese enterprises, contributing to promoting the domestic machinery manufacturing industry, especially the technology sector, to develop further.

Along with the EVFTA, the EU-Vietnam Investment Protection Agreement (EVIPA) is expected to contribute to the attraction of investment capital; the access to new, advanced, modern, and clean production and quality management processes from the EU. By capturing this large market, it will help to expand the cashew industry and the Vietnam cashew brand will reach further. It can be considered as a factor to help increase the volume and value of cashew. This year alone, with the EVFTA, the Vinacas expects to add 10 more markets, including those from intra-EU.

According to the Vinacas, the implementation of the EVFTA and EVIPA contributes to strengthening the cohesion of investment, trade, and economy between Vietnam and the EU. This is an opportunity for the Vinacas to connect and build better relationships with social - professional organizations, and specialized cashew organizations of Europe, such as the Nut Association (TNA), including trade promotion. The signing and implementation of EVFTA and EVIPA will contribute to improving the domestic investment environment, administrative reform, and institutional reform. As a result, the specialized inspection, tax, and customs procedures will be better and better in the future.

To wait for the market in front, large enterprises have organized many trade promotion activities and attended large fairs and exhibitions in Europe to conduct surveys, or establish joint-ventures and association, and open representative offices in European countries. These are companies with high competitive advantages after the EVFTA comes into effect. Vietnamese cashew enterprises are approaching directly and effectively working with European partners, studying the needs, requirements, and trade habits, and gradually upgrading production, processing, standards, and technology to satisfy customers.

However, the EVFTA also creates competitive pressure, especially for domestic small and medium-sized enterprises. This is a challenge for many enterprises that cannot invest in processing facilities that conform to European standards and compete fairly with foreign enterprises. The Vinacas said that there are more than 3,000 cashew processing facilities across the country, of which, there are up to 1,400 cashew processing facilities in Binh Phuoc Province alone. Previously, while incumbent the Chairman of the Vinacas, Mr. Nguyen Duc Thanh said that there were many domestic cashew processing enterprises, of which, a few dozen enterprises had a turnover of over $30 million per year; the rest was mostly small to micro-enterprises, with annual sales of a few hundreds of thousands of US dollars. It can be said that this is a huge pressure on the competition when deploying sales strategies and product strategies of each enterprise, as well as the whole industry. If these enterprises do not restructure, invest, and operate professionally, and work their way up themselves, they will face many difficulties or even be eliminated.

In the last five years, Son La province has been a hub of agricultural production. The province has increased exports of longan, mango, and passion fruit

Vietnam likely to export 6.7 million tonnes of rice this year

Vietnam is likely to reach its rice export target of 6.7 million tonnes this year thanks to favourable market conditions and high global demand

Exports of fruits and vegetables to Thailand surge 230%

Vietnam’s export turnover to Thailand tends to decrease, however the turnover of fruits and vegetables has achieved animpressive increase.