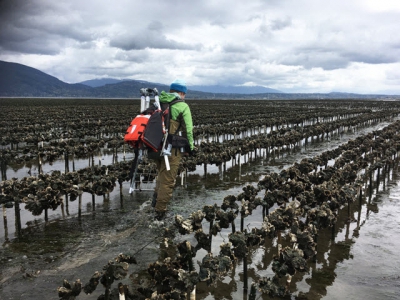 At one of Taylor Shellfish’s farms in Washington, the use of high-tech monitoring equipment is helping to determine the farms’ impacts on sensitive habitats like eelgrass beds. Photo by Molly Bogeberg.

Hog Island Oyster Co. could sell far more than the 3.5 million oysters, Manila clams and mussels it already produces annually. Most of the oysters sold at Hog Island’s four restaurants and to its wholesale customers are actually raised by other farmers.

“We need to grow more oysters,” Terry Sawyer, co-founder and VP, told the Advocate, adding that company leadership are seeking more permits for suitable farmable acreage. In doing so, it wants to be sure it minimizes impact to the surrounding ecosystem, upon which it depends, including the eelgrass that provides rich habitat for fish and crabs and absorbs carbon dioxide from the water.

The regulators who control permits require a buffer between oyster operations and eelgrass.

“What we have found and what we’ve shown is that the eelgrass beds move in among the gear,” said Sawyer. “We’ve seen that anecdotally and are trying to prove that.”

Every year, the world loses 7 percent of its sea grasses in some of the most valuable ecosystems on Earth. They provide essential habitat for many species of fish and birds, cleanse the water and absorb carbon dioxide. Driving the losses: development, warming air and water temperatures, eelgrass wasting disease and sea level rise.

Hog Island, California’s second-largest shellfish aquaculture company, is one of 18 in the state. It farms 160 acres in Tomales Bay, and a one-acre nursery operation in Humboldt Bay, and operates four restaurants in San Francisco, Marshall, Napa and at the farm in Tomales Bay. A fifth restaurant in Larkspur Landing is in the works.

Demand for responsibly farmed shellfish is high, prompting a need to determine whether farming operations and eelgrass can thrive together.

Farmers and researchers are turning to technology for clarification. Newly available and accessible tools, like drones and GoPro cameras are helping researchers, regulators and operators better understand how shellfish farming interacts with the surrounding marine ecosystem, including eelgrass beds.

A team of biologists is using drones to provide high-resolution maps as part of a study of eelgrass wasting disease along the Pacific Coast from Southern California to Alaska.

Hog Island and researchers from The Nature Conservancy and University of California, Santa Cruz, are using drones to capture data and study the relationship between oyster cultivation and eelgrass habitats.

“Our idea with drone surveys is that with the appropriate pilot — if industry or the regulator has a [drone] pilot’s license — they can fly within a day and have usable data in pretty short order,” said Dr. Walter Heady, senior scientist of the California Oceans Program for The Nature Conservancy.

Previously, monitoring data of oyster farming and eelgrass habitat has typically been an expensive aerial survey conducted once a year.

Regulators are cautious about allowing aquaculture operations to negatively impact eelgrass and are working under a state policy to minimize any damage to remaining eelgrass. Along with agricultural runoff, clearing subtidal land for aquaculture operations has been among the coastal development that led to eelgrass loss, said Heady.

“That sets the stage for this tension and there is a need to recover seagrass meadow area and regulate aquaculture,” said Heady. “It’s made it challenging for operations to do their work and provide sustainable food.” 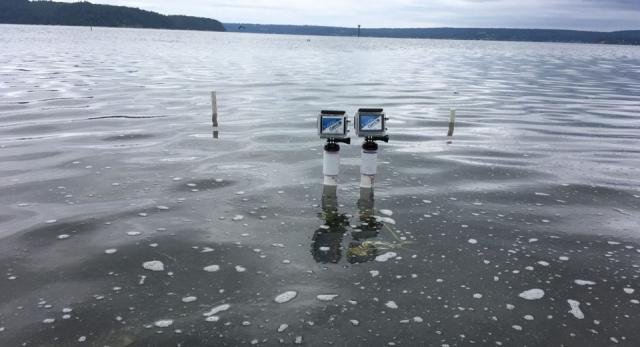 The Nature Conservancy — true to its name and mission — has long had an interest in eelgrass because it is a foundational habitat, meaning that like a coral reef or redwood forest, vast amounts of plant and animal species depend on it to be healthy and the habitat itself is a force that can change surrounding conditions.

In the last five years, TNC and the Pacific Marine and Estuarine Fish Habitat Partnership reviewed the scientific literature to inventory eelgrass in estuaries along the entire U.S. West Coast. The 2018 study confirmed the importance of eelgrass on a large, geographic scale.

Globally, eelgrass meadows are in decline. Along the West Coast, the threats to sea grasses are increased sedimentation, coastal development, ocean and atmospheric temperature increases and sea level rise, said the report.

“What became clear was that sea grass habitat was the most widely used nursery habitat both geographically and among 15 commercially important or imperiled fish species,” said Heady.

Hog Island, a certified B Corporation active in conversations about sustainable food production, protecting the marine environment and mitigating climate change, shared its observations and teamed with TNC. Heady, who knew colleagues at UC Santa Cruz researching seagrass habitat in the bay, spotted an opportunity for a project.

TNC funded a UC Santa Cruz graduate student’s work and helped her obtain a drone piloting license to pair drone surveys with scuba surveys in the estuary at the interface of eelgrass and aquaculture interaction.

Drones collect data across a grid programmed by smart phone at the rate of 100 acres per hour. Software then crunches the data into a usable, high-resolution image within two hours. Imagery recognition software then discerns eelgrass from the water.

Combined with the scuba survey, the researchers can tease out information on characteristics and qualities of the eelgrass beds, such as the density of the canopy. They’ve collected one year’s worth of data and the objective is to collect three years to capture environmental variability.

“We are early on in the study and are pretty excited about the work and have not found any negative impact as of yet and we’re looking forward to collecting a few more years of data,” said Heady.

The intention is that regulators and industry alike will be able to use the study information to protect eelgrass habitat — and help inform best practices for aquaculture and smart regulation.

In the next year he anticipates producing a document that can be used to inform best practices for eelgrass interactions and to help other farms monitor with drones. The drones Heady’s team used were “off-the-shelf” and without special modifications.

“This collects way more information faster than any other method,” said Heady, who expects the findings will also be published in a scientific journal in the next two to three years. 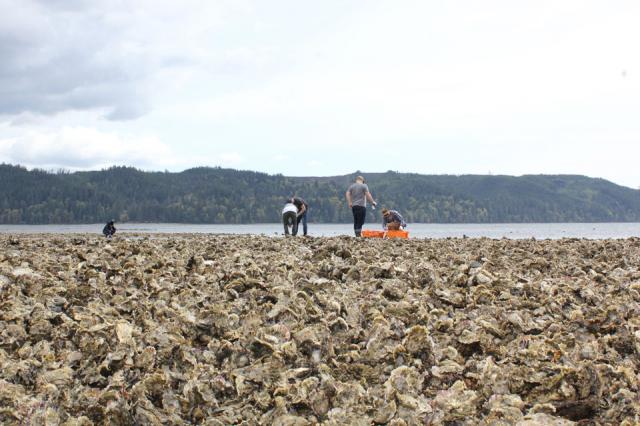 In Puget Sound — where eelgrass is considered stable and flourishing — better understanding of oyster farming near eelgrass habitat is also on the minds of shellfish growers.

Bill Dewey, director of public affairs for Taylor Shellfish, used GoPro active cameras to capture the vibrant, underwater habitat in which the company grows oysters, clams, mussels and geoducks. He showed the videos during an eelgrass session at the Pacific Coast Shellfish Growers Association conference in 2015 to an audience that included researchers from the National Oceanic and Atmospheric Administration (NOAA). He hopes that regulators do not completely exclude oyster culture from eelgrass beds.

“We may not have to get out of it. We can actually farm in it, and with ocean acidification it may be the only place we can farm because eelgrass is absorbing the [carbon dioxide] and regulating ocean chemistry,” said Dewey.

NOAA and the growers developed a research project to post cameras throughout Puget Sound and gather video data about how wild fish and crab species do in marine habitats with and without different methods of shellfish farming. In the last three years, 10 shellfish farms throughout the sound have used GoPro video cameras to watch fish and crabs in the surrounding habitat in a project with TNC, Washington Sea Grant and NOAA Fisheries. The research project has collected more than 1,500 hours of video since 2017 and is wrapping up data collection.

“We saw there was a need,” said Bogeberg. “TNC joined the team to provide assistance with science, convening shellfish growers, and science translation for the public and managers.”

The project is designed to answer the question: What fish and crab species are living within shellfish aquaculture habitat relative to natural habitats in Puget Sound?

“What we really are most interested in is: What are the ecological functions happening in these habitats, and what are the similarities and differences?” said Beth Sanderson, a fisheries biologist leading the ecological research program at NOAA’s Northwest Fisheries Science Center.

TNC is involved, said Bogeberg, because the project was an opportunity to further the organization’s goals to think about restorative aquaculture in coastal ecosystems and smart aquaculture growth to minimize impacts and support good actors.

TNC produced a video about the project shot at shellfish farms and is working to arrange for the video to be shown at local aquariums and marine centers.

The farms are owned by seven companies and one tribal nation, the Jamestown S’Klallam Tribe, and range from Blaine in the northern part of the sound, south to Olympia. The farms: Rivera’s Shellfish, Hama Hama Company, Chelsea Farms, Taylor Shellfish, Beagle Personal Farm and Drayton Harbor Oyster Co.

The researchers are using the cameras to visually sample three cultivation methods — flip bags, bottom culture and bottom clam nets — versus a comparable natural habitat.The scientists and growers hope to learn about fish and crabs and interactions among those animals in the shellfish farm structures compared to eelgrass habitat and on the tidal flats/unfarmed sediment.

Before GoPro cameras, the underwater cameras available were bigger, more expensive and harder to simultaneously deploy in the large number of areas, said Sanderson. GoPro cameras have also become familiar — so they are a powerful outreach and education tool, she added.

Using video footage means they’ll be able to observe the animal’s natural behavior, whether it is foraging or mating. From what Dewey has seen and documented on the water, there are healthy fish and crabs found in eelgrass areas — with and without oyster cultivation.

This summer and fall, when the study’s initial results are expected, should give some idea of whether the science supports what Dewey has anecdotally observed.

“We’re definitely seeing restrictions today because we don’t have good science to assess the equivalency of these habitats,” said Dewey. “We’re getting there. This work that’s being supported by TNC is definitely helping to answer these questions.”