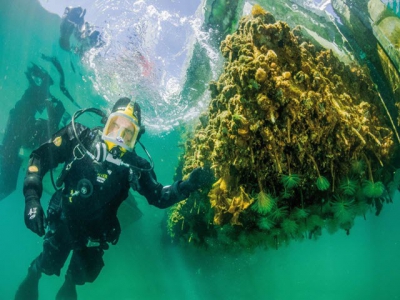 What is a marine pest?

However, not all marine pests are from outside Australia. Some are native to other regions of our country and have been transported into NSW, for example, through domestic shipping or the aquarium trade.

How are marine pests introduced?

Which species are marine pests?

What impacts do they have?

Marine pests can have severe ecological and economic impacts. For example, they can take over large areas of habitat to the detriment of native species. Some prey directly on native species or compete with them for food.

Pest species can also cause considerable economic damage. Infestations of marine pests can impact on marine industries, such as aquaculture, commercial and recreational fishing and boating, tourism and even international and domestic shipping. Some marine pests, such as toxic dinoflagellates, can threaten public health.

What is NSW DPI doing about marine pests?

NSW DPI is involved in the implementation of the national MarinePestPlan 2019-2023 which aims to prevent the introduction and translocation of introduced marine species (by managing ballast water, biofouling and other vectors), strengthen the national marine pest surveillance system, provide a national emergency preparedness and response capacity for outbreaks, support national research and development and engage with marine pest stakeholders.

NSW DPI Chairs a multiagency and stakeholder working group that is tasked with providing input into NSW marine pest management actions and to provide a forum to discuss national marine pest policy issues. This group discusses national policy issues and coordinates NSW responses to marine pest or suspect marine pest detections. NSW DPI also has an extensive advisory program to raise awareness of marine pests including how to identify marine pests and how to help prevent their spread.

What can you do to help?

Members of the public, including fishers, divers and members of local environmental groups, are sometimes the first to notice a new introduced marine species or the fact that an existing pest has spread into a new area. This information can be very valuable in helping to manage pest problems.

Under the NSW Biosecurity legislation (NSW Biosecurity Act 2015) people are expected to have a basic level of knowledge about the biosecurity risks they might encounter in their normal work and general biosecurity duty activities. All community members have a responsibility to consider how actions, or in some cases lack of action could have a negative impact on another person, business enterprise, animal or the environment. We must then take all reasonable and practical measures to prevent or minimise the potential impact.

Prices of fish, shrimp flourishes and seafood exports will reach US$9.6 billion

Instead of reducing prices during the first threequarters of the year, recently, prices of shrimp and pangasius have gradually increased.