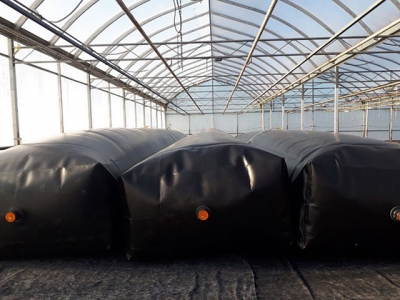 The Sth’oqui Aquaculture Limited Partnership of the Sumas First Nation, which operates a 100-metric-ton tilapia farm in Chilliwack, British Columbia, now uses an anaerobic digester that converts fish waste to biogas, which is stored in these bags.

A handful of aquaculture companies in British Columbia are upgrading their equipment to make their businesses cleaner, more sustainable and more efficient, thanks to grants they received from Canada’s Department of Fisheries and Oceans. DFO launched its Fisheries and Aquaculture Clean Technology Adoption Program in 2017, pledging a total of CAN $20 million over four years to help the fisheries and aquaculture industries improve their environmental performance. To date, $9.3 million has been committed.

The largest grant distributed was $101,817 to the Sth’oqui Aquaculture Limited Partnership of the Sumas First Nation, which operates a 100-metric-ton tilapia farm in Chilliwack, British Columbia. The grant supports the installation of an anaerobic digester which converts fish waste to biogas, fertilizer and water. In the process it reduces waste and produces low-carbon energy to power the land-based facility.

“Previously our waste went into a constructed wasteland and settling lagoon which followed the requirements of the Department of Fisheries and Oceans but wasn’t a sustainable solution,” he told the Advocate. “We wanted to double our production but didn’t have enough space to double the size of the lagoon. As a result of the anaerobic digester we can eliminate the lagoon completely.”

Hougen said the digester, which cost $104,000, is heavily used in other parts of the world but relatively new to North America. The tilapia farm previously used gas and woodchip boilers to heat water in the fish tanks but the energy provided by the digester will eliminate all reliance on natural gas, a significant cost savings.

“There’s huge efficiency in using this because the water coming out the back end of the digester goes back into the farm, making us a true recirculating aquaculture system,” he said. “But it’s also a huge environmental thing, providing us with peace of mind because it eliminates our environmental impact and reduces our carbon footprint. The fact that we’re looking after the land is very important to us as First Nations.”

Manatee Holdings, a geoduck-farming operation on Vancouver Island, received $51,953 to support an automated photobioreactor that will increase the efficiency of algal production, decrease energy use and reduce the number of plastic bags used to cultivate algae.

“The most expensive part of running a shellfish hatchery is producing the algae they eat,” said Richard Ross, operations manager. The photobioreactor increases the algae growth rate by 455 percent from 1.5 million cells per ml to 8 million cells per ml. A self-enclosed contraption, it features a light and pump system, a computer that monitors the growth of the algae and a self-cleaning and refrigeration option. Ross said 10 photobioreactors would be required to support the company’s full needs and that this first one was an opportunity to understand and realize its potential.

“It saves us $5,000 to $6,000 per year in energy costs and plastic bags, but it also gives us more concentrated algae and uses a smaller space than what our present methods require,” he added.

Another grant recipient is Effingham Oysters in Barkley Sound, which received $37,313 to install solar panels and energy storage batteries. These measures reduced the cost of diesel transport and annual consumption by two-thirds as well as decreasing the risk of spills. Owner Mica Verbrugge said he is saving 9,000 liters of diesel annually as a result of this investment, which amounts to $11,000.

“The solar technology is fantastic and I’m looking at investing another $60,000 to expand my solar use and possibly convert one of my barges,” he said, knowing that the upgrades aren’t necessarily translating to sales – at least not yet. “These changes have made my business greener but I’m not sure it makes us more attractive to customers. In theory they might say it makes a difference to them, but in reality, most of them are pretty price-oriented.”

Steve Atkinson, owner of Taste of BC Aquafarms in Nanaimo, BC, received $43,488 to replace an existing oil-fired water boiler with a solar hot water system to heat water in the recirculating aquaculture system. This will eliminate oil consumption, reduce carbon dioxide emissions and yield cost savings on his land-based steelhead salmon farm. The system, installed in the fall and commissioned in March, will save 17 tons of carbon dioxide emissions per year, Atkinson said.

“Everything we do is about being sustainable, so the solar hot water system is just one of the pieces for us in producing salmon sustainably. I think it makes us more attractive to our clients, too, so by reducing our carbon footprint, it’s good for our business,” he said. “And we couldn’t have done this without the federal government covering the capital cost.”