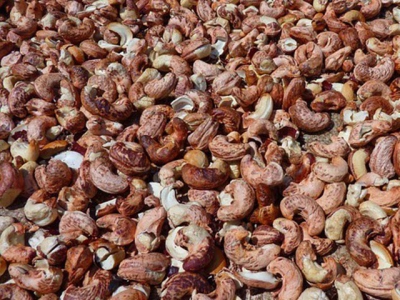 Vietnam is the No 1 processed cashew nut exporter in the world, and the biggest raw cashew nut importer.

According to the General Department of Customs (GDC), Vietnam imported 192,000 tons of raw materials in June, worth $218.6 million, an increase of 74.8 percent in volume and 61.1 percent in import turnover.

According to the General Department of Customs (GDC), Vietnam imported 192,000 tons of raw materials in June, worth $218.6 million, an increase of 74.8 percent in volume and 61.1 percent in import turnover.

Nguyen Duc Thanh, general director of Tan An Foods Processing Export Co Ltd, former chair of the Vietnam Cashew Association (Vinacas), warned that cashew nut exports in the second half of the year will be affected by unfavorable conditions.

First, domestic production is meeting difficulties. Some small and medium enterprises in Binh Phuoc and Dong Nai have shut down because of expensive raw materials and cheap finished products. Only large companies still maintain production.

Second, processors are facing problemd in material supply. The Ivory Coast government is taking measures to keep the raw cashew nut prices high. As the raw material prices stay high, Vietnamese processors do not intend to import materials at this time. Meanwhile, the domestic raw material supplies have been used up.

However, according to Thanh, enough materials are available for production until the end of the year.

Vinacas has urged processing companies to consider the minimum price of $3/lb for W320 cashew nuts when signing export contracts for upcoming months.

The low export prices explain the low export turnover in H1. Vietnam exported 228,000 tons of cashew nut products, worth $1.5 billion, an increase of 16.6 percent in volume and 0.7 percent in value compared with H1 2019.

Analysts warned that export turnover in Q3 would decrease sharply because export prices were very low in late Q2 and early Q3.

Vietnam coffee prices were subdued due to weak demand and ample supplies in Indonesia and Brazil, though global prices rose, traders said on Thursday.