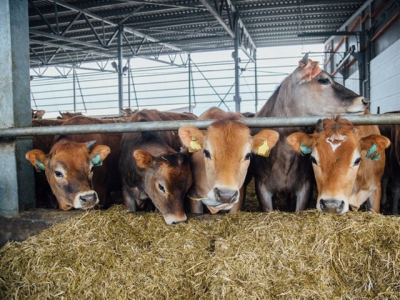 A team of researchers from the Federal University of Rio Grande do Sul and the Brazilian Agricultural Research Corporation explored the use of green tea and oregano extracts in the diets of Jersey cows as a way to influence feed intake along with animal behavior and health.

The objective of this research was to evaluate the intake, feeding and social behavior and health status of dairy cows fed with oregano and green tea extracts during the transition period,”​ the researchers said.

Following calving, cows on the oregano-supplemented feed spent less time eating concentrate than cows on either of the other diets, they said. They made fewer trips to the feeder.

Before calving, cows receiving the diet supplemented with green tea made more trips to the feeder and spent less time interacting than cows on the other diets, they said.

Metabolic disorders along with clinical and subclinical disease or disorders occurred in similar numbers for cows on all diets. However, those receiving the oregano extract tended to show “clinical symptoms or subclinical diagnosis​” about eight days later than those eating the GT extract, the researchers said. Cows eating the oregano extract tended to produce more milk.

“Oregano extract, but not green tea extract, tended to present beneficial effects on DMI and feeding rate in Jersey dairy cows during the first weeks after calving,” ​they said. “Extracts influenced distinctly feeding and social behavior, such as the number of visits to the trough, social and aggressive interactions.”​

“Considering the improvements in intake rate, feed efficiency and feeding and social behavior traits, oregano extract may contribute to enhance welfare during the transition period,”​ the researchers added.

Why use green tea, oregano in Jersey cow diets?​

Both green tea and oregano plants generate catechins and carvacrol as secondary metabolites, they said.

“In humans and monogastric animals, both compounds have been used primarily as antibacterial, antidepressant as well as powerful immune system and antioxidant stimulants, while in ruminants, they are mostly used to modulate ruminal fermentation,”​ they said.

Ruminants’ digestive systems can alter the biochemical structure of secondary plant compounds, they said. However, earlier research indicates that they do not cease functioning and may boost immune defenses and antioxidant systems.

“This ability has been little explored during the transition period, when physiological and metabolic changes have great impact in the defense system of the organism, making dairy cows more susceptible to the occurrence of metabolic disorders and infectious diseases,”​ the researchers said of role plant compounds might play in cow performance.

The secondary plant compounds in some plants may influence the expression of dopamine and serotonin receptors, which could alter cows’ behavior and response to the environment, they said.

Previous research with dairy heifers noted changes to time spent eating concentrate and engaging in social behavior, they said. However, the use has not been explored in dairy cows or during the transition period.

“The effects of plant extracts on the immune system has also been evaluated, but its potential in reducing the occurrence of metabolic disorders and infectious diseases when fed during the transition period is still little explored,” ​the researchers said.

During the feeding trial, 24 Jersey cows about 28 days pre-calving started on one of three trial diets, the researchers said. Cows remained in the trial through 21 days of lactation – the first seven days were for adaptation and measurements were gathered during the remaining 42.

Prior to calving, cows received a diet with 4.6kg of dry matter (DM) from corn silage and 3.9kg of DM from concentrate – the concentrate included ground corn grain, wheat bran, soybean meal, ground soybeans and mineral salt, they said. Diets were either not supplemented (CON), had 5g per day green tea extract (GT) or 10g per day oregano extract (OE).

Following calving, the diet included grazed rangeland pasture and ryegrass along with 4kg DM corn silage and 4.1kg DM of concentrate, which included ground corn, wheat bran, soybean meal, ground soybeans and mineral and vitamin supplement, they said. The diets also continued to be not supplemented or include GT or OE.

Milk production was noted daily and cows were weighed weekly and given a body condition score (BCS), the researchers said. Fecal matter was collected, and production was estimated.

Both milk fat and protein content were established using infrared spectrophotometry, they said. Blood samples were gathered for analysis on days -7, -4, -2, at calving, 2, 4, 7, 14 and 21.

Cows were monitored constantly for daily behavior including rumination, rest, activity, time spent at the feed trough – with or without eating – time used to eat concentrate or silage, aggression events, non-aggressive interactions and time spent drinking, the researchers said. Clinical and subclinical health problems were recorded as was the amount of time from calving until the first disease was reported.

Plant extract supplementation was not found to alter body weight or body condition score in the final 21 days before calving or in the first 21 days of lactation, nor did it change weight loss or BSC loss, the researchers said. DMI was similar for cows on all diets pre-calving, although cows on the OE diet tended to spend less time lying down or eating concentrate.

“After calving, OE cows tended to have higher DMI than CON and had a higher concentrate intake rate than GT and CON cows,” ​they said. “Cows in the OE group tended to produce more milk corrected for energy (ECM) than the cows in CON while produced 26.4% more ECM than cows in GT. The OE cows tended to be more efficient, producing 0.3 kg more of milk for each kg of DM ingested compared with cows fed GT.”​

Cows on all diets had similar numbers of metabolic disorders and outbreaks of clinical or subclinical cases, the researchers said. However, initial clinical symptoms or subclinical diagnosis were noted about eight days later in cows on the OE diet compared to those on the GT feed.

“Oregano and green tea extracts administered into the diet of lactating Jersey cows during the transition periods change several traits of feeding and social behavior but do not change diet intake and the occurrence of diseases,” ​they said.

Stand out from the herd: How cows communicate through their lives

Research at the University of Sydney has shown that cows maintain individual voices in a variety of emotional situations.

Researchers listen in on 'conversations' between calves and their mothers