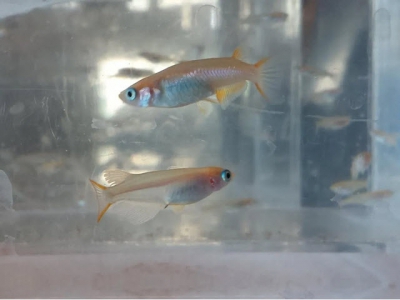 Fish that are subjected to chronic exposure to microplastic fibres suffer from issues including aneurysms and gill damage, according to a new study.

The minuscule fibres, which are made of polyester, polypropylene and other types of plastics, are shed or washed off of synthetic textiles used in clothing and other consumer and industrial products. Once shed, they enter wastewater and accumulate in oceans, rivers and lakes worldwide, accounting for more than 90 percent of microplastic pollution in some areas.

"Past field studies have shown that many fish eat large quantities of the fibres every day but have protective mechanisms within the gut that seem to be preventing damage," said David E Hinton, Nicholas distinguished professor of environmental quality at Duke University. "But when you extend your study down to the tissue and cellular levels, as we did, harmful changes are observed."

"In addition to the fibres that fish eat, hundreds or thousands of microfibres also pass through their gills each day, and we find that this is where much of the damage occurs," said Melissa Chernick, a researcher in Hinton's lab at Duke's Nicholas School of the Environment.

The team published its peer-reviewed findings this month in the open-access journal PLoS ONE.

They concluded that fish exposed to high levels of microfibres in their tank water for 21 days exhibited aneurysms, fused membranes and increased mucus production in their gills as well as significant changes to the epithelial cells lining their gills and other effects.

"There were severe changes, and a lot of them. And each change can affect respiration," Chernick said. "If you're a fish in the wild with gill damage and you're in a low-oxygen environment or being chased by a predator, you're in trouble. The same goes if you're competing with other fish for food. Just having these damages would cause you to be less competitive."

Though the gut itself seems to be protected from similar damage, the new study finds that when microplastic fibres are in the gut, they may release chemical coatings that are taken up into the fish's bloodstream.

The researchers are still working to identify these chemicals and determine their impacts, but one troubling effect has already been observed. Female fish exposed to fibres containing polypropylene produced more eggs over time, suggesting that chemicals that may be leaching from the microfibres are acting as endocrine disruptors.

Worldwide, nearly six million tons of synthetic fibres such as polyester or polypropylene were produced in 2016. These textiles shed microfibres during washing or regular use. A single garment can shed nearly 2,000 microfibres per wash, Chernick noted, and because wastewater treatment plants aren't equipped to remove the fibres, they escape into downstream surface waters and accumulate in the environment. They can also enter the environment through sewage release, stormwater runoff or atmospheric deposition.

"Even if they are released miles from the ocean, they can work their way down there. So they affect both freshwater and marine organisms," Hinton said.

To conduct the research, they placed 27 breeding pairs of healthy Japanese medaka fish (Oryzias latipes) in water tanks with high levels of suspended microplastic fibres. They monitored fish weights, egg production, and ingestion and egestion of fibres - how much fibre went in, how much was excreted out - weekly. After 21 days, they examined the fish's tissues to see what changes, if any, had occurred. Tank water was changed weekly and stored for chemical analysis, to determine what dyes or additives had been released.

"Microplastic pollution is an environmental threat that poses increasing risks for species and ecosystems worldwide," Chernick said. "Until now, most studies have focused primarily on looking for the presence of plastics in animals, without identifying what the effects on various tissues might be. But that's exactly where our study suggests the science needs to go."

The full study, published under the title: “Chronic Microfibre Exposure in Adult Japanese Medaka (Oryzias latipes)," can be accessed here.