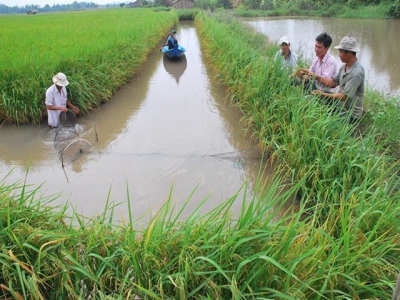 Thanks to favourable weather conditions, farmers in the southern province of Kien Giang have had a bumper rice-shrimp crop in terms of production, productivity and prices.

Farmers in U Minh Thuong Region of Kien Giang Province are happily harvesting the rice-shrimp crop as they have a bumper crop and get good prices.  As a district with the largest rice-shrimp production area in the region, thanks to favourable weather and effective saltwater control, An Minh District this year has a larger cultivation area than planned.

Nguyen Van Tung, Deputy Head of the Department of Agriculture and Rural Development of An Minh District said that the district planned to sow 21,000 ha of rice in the 2021 season, but the actual cultivation area increased to 23,566 ha.

“Until now, farmers in An Minh district has harvested about 6,000 ha with the average yield of 4.83 tons/ha. After the rice is harvested, many traders go to buy it, so the consumption is quite convenient,” Tùng said.

“Currently, over 17,000 ha of rice is ready for harvest. Farmers will focus on harvesting from now until January 2022, then will take saltwater into the field to serve shrimp farming,” Tùng said.

Having just harvested three ha of rice, Nguyen Huynh Thanh from Dong Hoa commune, An Minh district excitedly said that this year, he chose the fragrant rice variety ST25 to plant the rice-shrimp crop. Thanks to favourable weather, the rice grew well with a yield of more than 5 tons/ha. Traders offered to buy at the price of VND8,200 per kg.

As rice grown on shrimp farming land does not cost as much investment as intensive rice production, I still have a profit of over VND30 million/ha after deducting all costs, Thanh said, adding that this year’s rice-shrimp crop is the most bumper crop that local farmers got in the last few years.

Similarly, in An Bien district, farmers have so far harvested 8,918 out of 18,828 ha of rice-shrimp farming land.

With favourable weather conditions and effective saltwater control, farmers got a high rice yield, an estimated 5.7 tons per ha.

Currently, the price of ST24, ST25 rice is purchased by traders from VND8,100 to 8,500 per kg, other varieties from VND5,600 to 6,000 VND per kg. Particularly, rice grown with VietGAP standards and organic farming has a higher price.

With the current good yield and selling price, farmers are earning a good income from a bountiful rice crop.

The Vietnam Cassava Association has lodged a complaint to the PM, saying that a number of enterprises are facing a risk of going bankrupt because of issues

Amid prolonged drought in the Central Highlands, water-saving irrigation system has attracted more and more attention because the technology can save not only

With the aim of introducing pomelo and lemon to New Zealand, the Plant Protection Department (PPD) has finalized technical paperwork and called relevant units’