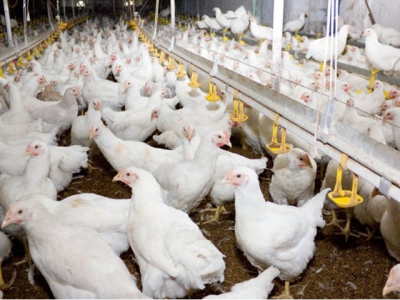 A broiler study showed that a 22–23 g/kg reduction in the crude protein (CP) content of grower and finisher diets, with adequate supplementation of essential amino acids, did not result in adverse effects on growth performance and slaughter yields.

The study, published in the October edition of Poultry Science​​​, involved researchers, Jan van Harn and Marinus Van ​Krimpen, based at Wageningen Livestock Research, along with Albert Dijkslag from ForFarmers.

The authors found CP reduction reduced nitrogen and moisture content of litter and occurrence and the severity of footpad lesions.

“Reducing dietary CP seems to be a promising approach to reduce nitrogen excretion from broiler houses and to reduce the amount of vegetable protein in broiler diets, while simultaneously improving broiler welfare,” ​they commented.

Reduction of dietary protein content in poultry diets has several potential benefits on EU protein self-sufficiency, environmental pollution and broiler health and welfare, provided that the growth performance and slaughter yield are not compromised, said the team.

The objective of their research was to evaluate the effects of a reduction of 1, 2 or 3% units in dietary CP content in the grower (11–28 days) and finisher phase (28– 35 days), with a partial replacement of soybean meal by free AA, including glycine, on growth performance, slaughter yields, litter quality and footpad lesions of broilers.

The experimental diets were formulated and produced by ForFarmers.

A three-phase feeding program was applied. Starter, grower and finisher diets were provided from 0 to 11, 11 to 28 and 28 to 35 days of age, respectively.

The team said that, during the starter phase, all animals received the same control diet with a CP content of 216 g/kg and 11.5 g/kg digestible Lys. Thereafter, four experimental feeding programs differing in CP levels (control and with 1% (CP-1%), 2% (CP-2%) and 3% (CP-3%) lower dietary CP content in each phase) were provided. The control diets had a CP content in the grower and finisher phase of 208 and 198 g/kg, respectively, they said.

They were formulated to meet or exceed the recommendations for apparent fecal digestible AA - lysine, methionine, threonine, tryptophan, isoleucine, valine, and arginine - according to CVB recommendations (CVB, 2012), and to be iso-energetic within each phase.

The team said they added free glycine to the low protein diets to the apparent fecal digestible glycine + serine in the control diet, to maintain the production results of broilers.

Free glycine was not approved to be used as a feed additive in the Netherlands, so the researchers reported that they had to seek permission from the Veterinary Medicinal Products Unit to carry out the study.

None of the low CP feeding programs affected body weight gain (BWG), feed intake or mortality from day 0 to day 35, found the researchers.

However, CP conversion was improved with the reduction of CP content of the diet, they said. Broilers fed the CP-2% or CP-3% feeding program had an improved feed conversion ratio (FCR).

“It might be that the decreased growth performance results of broilers fed the control diet could be explained by the deteriorated litter quality (Greene et al., 1985; Martland, 1985),”​ commented the authors.

The deteriorated litter quality in the control group may also have led to some thermal discomfort for the birds, which may also have affected their growth performance results, especially FCR, negatively (De Jong et al., 2014), said the poultry nutrition experts.

“Another reason for the deteriorated FCR of the control fed birds could be a poorer intestinal health. It is well known that high protein diets might have negative effects on gut health and performance (Qaisrani et al., 2015; Apajalahti and Vienola, 2016). ​

“Protein that was not digested up to the end of the small intestine can potentially be fermented by putrefactive bacteria in the caecum. Putrefaction produces many harmful and toxic compounds like amines, indoles, phenols, cresol and ammonia, which in high concentrations may have adverse effects on chicken growth and performance (Apajalahti and Vienola, 2016),” ​they wrote.

Reduction of the protein bypassing the small intestine, by reducing the dietary CP content, might reduce the production of toxic protein fermentation metabolites in the caeca, added the researchers.

Moreover, the inclusion of free glycine in the low CP diets in the study, whereby the glycine and serine recommendation (CVB, 2018) of the animal is covered, could be a reason for the similar (CP-1% and CP-3% feeding program) or even better (CP-2% feeding program) growth performance results in the low protein groups, they reported.

Supplemental glycine may be necessary to support maximum performance for broiler chickens when they are fed diets based on vegetable ingredients and with low protein levels, according to Ospina-Rojas et al. (2013).

The incidence of footpad lesions in the present study decreased linearly with the reduction of the dietary CP content, concluded the team.

“It is well known that the most important factor causing footpad lesions is considered to be wet litter (Shepherd and Fairchild, 2010). In the present study, the observed differences in litter quality are in good agreement with the determined footpad scores. Broilers fed the control feeding program had the lowest scores for litter quality and the highest footpad scores.”​

“It is well known that water intake increases with the increase of both dEB and potassium (Mushtaq et al., 2013) and that this is the most likely reason for the deteriorated litter quality and the higher footpad score of the broilers fed the control diet. In addition to potassium, soybean meal contains also other components that can be responsible for a higher water excretion, such as fiber with high water retention capacity and fermentable sugars (Francesch and Brufau, 2004).”​

Reducing dietary CP resulted in a decrease of the litter moisture and nitrogen content, noted the team.