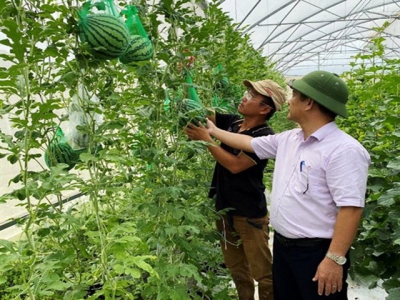 BÌNH ĐỊNH — Despite hardships along the way, perseverance has brought young man success in developing a high-tech farming project in his hometown in Bình Định Province.

Though he had what many graduates would call a dream job, he quit and moved back to his hometown to work as a farmer, Dân Trí online newspaper reported.

Diệp said that he heard someone in Quảng Ngãi Province has succeeded in growing lilies - a flower thought to grow in only temperate climatic gardens.

He decided to go to Đà Lạt City, Lâm Đồng Province, the most famous flower growing place in Việt Nam, to learn how to grow lilies.

In 2012, Diệp asked his parents for VNĐ20 million to invest in growing lilies to sell for Tết (Lunar New Year) festival.

Though he had some experience from learning growing lilies in Đà Lạt City for a few months, he failed in his hometown.

Undeterred, he went back to Đà Lạt to try again.

He went to prestigious gardeners to find answers for his past failures.

"I failed by trying to apply the process of growing flowers in Đà Lạt City to my hometown while the climate in the two places was completely different," Diệp said.

"It takes 80 days to grow lilies in Đà Lạt, while in the hot weather in Hoài Ân District, it's shorted to 60 days and the care must be different also."

After research, in 2014, he planted 700 lily pots to sell at Tết and gained initial success.

Diệp earned VNĐ100 million from that crop after deducting all expenses.

Then he rented more land to scale up by building a net house for farming.

But success has not come to him yet.

Lilies are very sensitive to the weather and they need suitable care, depending on the climate of each region, to help plants grow well.

After facing many failures, Diệp gained more experience and skill to care for lilies.

In 2016, he expanded production with 4,000 pots of lilies to earn money to build a greenhouse.

That year, the lilies grew very well but floods destroyed everything he had work for.

He once again tried to rise up from the ashes to continue his business.

In recent years, growing lilies has brought profits to him. He has expanded production and gone to high-tech farming on 5ha.

Since the end of 2018, some of his products have been sold in local markets and other provinces.

To reach long-term development, Diệp is preparing procedures to register for product protection and an origin-tracing stamp.

“In addition to reliable quality, my products attract many customers as the transportation cost from Bình Định Province to northern provinces is lower than buying goods from the south. Moreover, short-distance transport also helps the products be better preserved,” he said.

Diệp built a greenhouse system on 2,000sq.m to grow cantaloupe melons and other fruits and vegetables.

For cantaloupe melons alone, on 1,000sq.m, he harvests four times per year. The profits made up nearly 60 per cent of the total takings.

By the end of this year, he plans to build a store to sell his products in Tăng Bạt Hổ Township and link with other retail shops to boost consumption in the province and Đà Nẵng City.

"When I left HCM City to return to my hometown to do farming, many said it was crazy," Diệp said.

"They said I did not have any knowledge about agriculture and high-tech farming. At that time, everyone thought I would definitely fail, but the reality was different."

"The road ahead is still long, but I am confident I will gain good results. If you love your job, are dedicated to your job and with the right amount of effort and determination, everything is possible," Diệp said.

Việt Nam may not reach its pepper export goal for this year due to many difficulties, according to the Việt Nam Pepper Association (VPA).