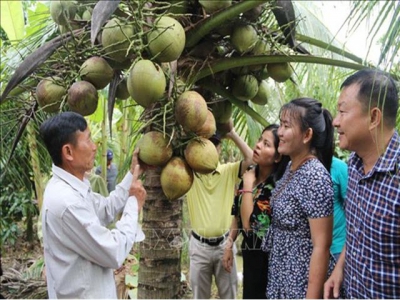 Ngô Thị Hồng Nghi, head of the district’s Bureau of Agriculture and Rural Development, said the district has advantages in growing fruits and being the largest area under fruits in the province.

But they do not fetch high values since farmers do not use advanced farming techniques and have not built sustainable links with companies, she said.

Last year, the province's Department of Agriculture and Rural Development assisted the district’s farmers with growing clean produce, adapting to climate change, building brand names, and linking up with companies to ensure they can sell their produce.

This has helped the district develop fruit cultivation towards commercial production, improving yields, quality and efficiency.

They include sáp coconut, green skin and pink flesh grapefruit, mango and rambutan.

Nguyễn Văn Sử, chairman of the Hòa Tân Sáp Coconut Co-operative in Hòa Tân Commune, said the co-operative has 53 members with 45ha of sáp coconut, including 28ha of VietGAP quality.

Sáp coconut grown using traditional methods could normally be harvested only five or six years after planting, but VietGAP quality ones could be harvested after four years, he said.

The variety has soft and thick pulp and is used mostly for desserts like coconut shakes and flesh mixed with milk, sugar and ice.

A mature sáp coconut tree can produce 120-150 nuts a year, but only 40-50 per cent have the soft and thick pulp that qualify them as sáp, and the remaining have normal pulp.

The variety grows only in Cầu Kè District.

Thạch Phu My, a member of the Hòa Tân Sáp Coconut Co-operative, said members could earn VNĐ10 million (US$430) a year from a mature tree.

Phạm Minh Truyền, director of the department, said the province has zoned 20,000ha for specialty fruits this year.

Cầu Kè has 4,000ha of fruits in combination with tourism, he said.

The Cửu Long (Mekong) Delta province plans to mobilise VNĐ620 billion (US$26.8 million) from various sources to build infrastructure and facilities for developing fruit cultivation and consumption, according to the department.

It has a number of support policies to encourage companies produce high-quality fruit seedlings and buy and process fruits for export.

It targets average fruit production value of VNĐ170 million ($7,350) per hectare per year, the department added.

The Cửu Long (Mekong) Delta province of Bạc Liêu has decided to expand the cultivation of ST 24 and ST 25, two local rice varieties that rank among the world’s

Việt Nam may not reach its pepper export goal for this year due to many difficulties, according to the Việt Nam Pepper Association (VPA).