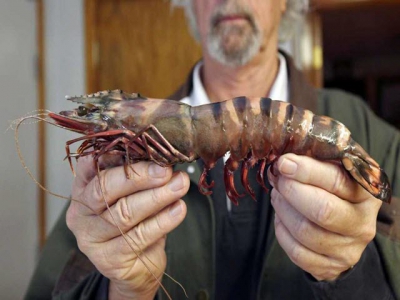 The five major phyla associated with P. monodon intestines were Actinobacteria, Fusobacteria, Bacteroides, Firmicutes and Proteobacteria (Fig. 3). Among them, Proteobacteria (>70 per cent of total sequences) dominated in all shrimp intestines, followed by Firmicutes, except for the WC2 library. WC2 library had 69 per cent of total sequences belonging to Firmicutes, and 26 per cent of total sequences were from Proteobacteria. Considering intra-group diversity, WC shrimp had more variation in phyla distribution whereas DB shrimp had relatively similar distributions, with Proteobacteria being the major phylum followed by Firmicutes (Fig. 3). To visualize bacterial composition in hierarchical orders, pie charts were constructed to represent bacterial abundance in intestines of WC and DB P. monodon (Fig. 4 and Fig. S1). Only phyla containing >100 total pyrosequencing reads were constructed into taxonomic nodes. Vibrio and Photobacterium were dominant in all six libraries, suggesting that these bacterial genera were well-adapted to conditions in P. monodon intestines and surrounding aquatic environments. Surprisingly, Lactobacillus was also present at high abundance in the WC2 library (Fig. S1A). Lactobacillus can be found in intestines of aquatic animals and marine environments, thus, the unexpectedly high abundance of Lactobacillus in the WC2 library could be possibly acquired from ingested food. 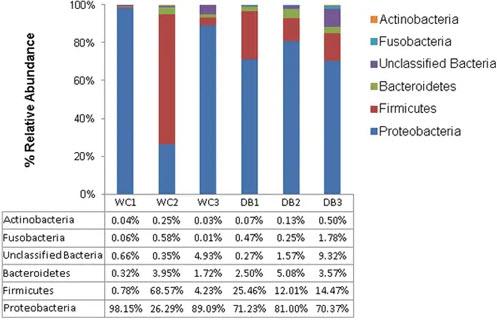 Figure 3. Frequency distribution of bacterial phyla in Penaeus monodon intestines from pyrosequencing libraries of the wild-caught group (WC1, WC2 and WC3), and the domesticated group (DB1, DB2 and DB3). 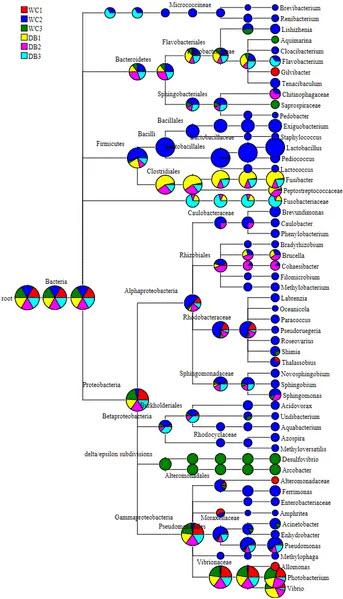 While the WC libraries were widely distributed in all taxonomic nodes, the DB libraries were mostly distributed in classes Gammaproteobacteria and Clostridia (Fig. S1). Interestingly, Fusibacter (class Clostridia) were found in higher proportions in the DB group than the WC group (Fig. S1B). Bacterial frequency and their classification are summarized in Table S1. Pyrosequencing reads that could not be classified at genus level were classified to the nearest taxonomic ranking (Table S1).

From the OTU (97 per cent similarity) distribution among the six libraries (Fig. 5), 1,541 OTUs were found to be unique within the WC libraries, and only 37 OTUs were shared within the group (2.4 per cent) (Fig. 5A). On the other hand, 689 unique OTUs were obtained within the domesticated libraries, and 18 OTUs were common within this group (2.6 per cent) (Fig. 5B), reflecting bacterial variations among individual WC and DB P. monodon. These bacteria could perhaps represent transient bacterial populations. Shared OTUs were assigned to the nearest species based on Blast analysis to determine common bacterial species (Fig. 5C). Interestingly, all 18 OTUs shared in the domesticated libraries were a subset of those 37 OTUs shared within the WC libraries, and these may be part of the core intestinal bacteria in P. monodon adults. The shared OTUs were classified to Proteobacteria, Firmicutes and Bacteroidetes. Phylum Proteobacteria contained the most shared OTUs among the six libraries, comprising Novosphingobium, Photobacterium, Pseudomonas, Sphingomonas, Undibacterium, and Vibrio (Fig. 5C). Among Firmicutes, a shared OTU was classified to Fusibacter paucivorans, whereas the other OTU could only be classified to phylum level. Only Cloacibacterium normanense from phylum Bacteroidetes was common across the WC and DB libraries. 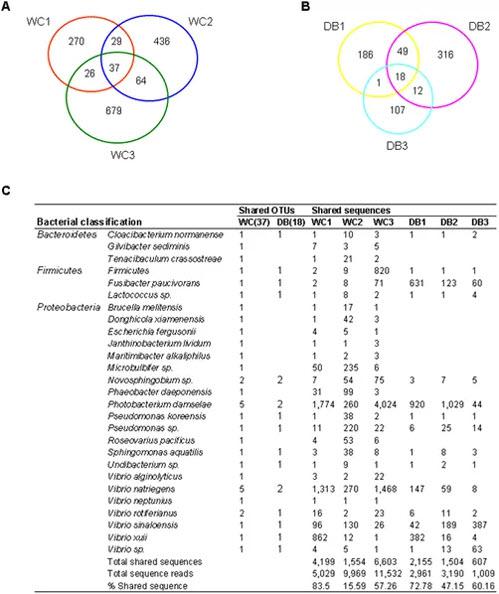 On the other hand, there were distinct differences between the microbial structures of the WC and the DB shrimp. From 37 OTUs found from the WC libraries, the 19 OTUs absent in the domesticated included several bacteria previously found in marine sediment or marine organisms such as Gilvibacter sediminis, Microbulbifer sp., Donghicola xiamenensis, Tenacibaculum crassostreae, Maritimibacter alkaliphilus, Phaeobacter daeponensis, and Roseovarius pacificus. In addition, two Vibrio species were found only in the WC. Interestingly, an antibiotic-producing bacterium Janthinobacterium lividum was also found only in the WC.

Principal coordinate analysis (PCoA) based on weighted-UniFrac distance showed that bacterial communities in the intestines of each shrimp in the WC were separated from one another, suggesting individual variation, whereas the DB group were clustered closer together (Fig. 6). The PCoA pattern suggested that bacterial populations in DB P. monodon showed more similarities within the group whereas the WC shrimp had higher variation. However, the statistical analysis of intestinal bacterial diversity did not show significant differences (P-value >0.05) between the WC and DB shrimp. 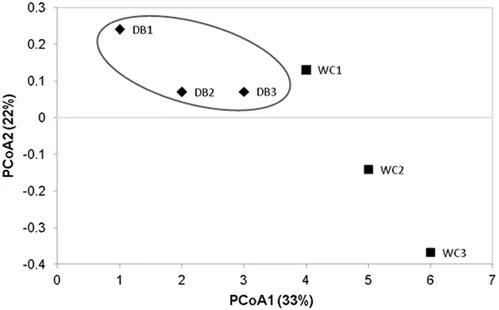 Figure 6. Principal coordinate analysis (PCoA) based on weighted-UniFrac analysis of bacterial populations associated with P. monodon intestines from the wild-caught group (WC1, WC2, and WC3) and the domesticated group (DB1, DB2 and DB3).

The bacterial patterns in intestines of WC and DB shrimp were compared by denaturing gradient gel electrophoresis (DGGE) (Fig. 7). DGGE bands from each sample were selected for sequencing (Fig. 7A). The majority of DGGE bands from all six libraries were highly similar to bacteria from Vibrio and Photobacterium. One dominant DGGE band similar to Lactobacillus sp. (Fig. 7A, band B1) was only found in WC2. A sequence similar to Thalassomonas sp. (band C1) was also found in WC3. Sequences of DGGE bands similar to Fusibacter were found in DB1 and DB2. Consistent with the pyrosequencing result, cluster analysis of DGGE band profiles based on the Pearson distance matrix revealed that bacterial populations in WC shrimp showed higher individual variation than those in DB shrimp (Fig. 7B). 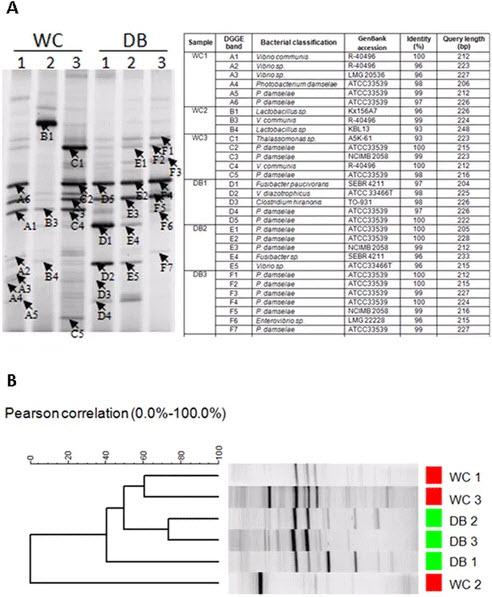 The bacteria profiles were from intestines of wild-caught shrimp (WC1, WC2, and WC3) and domesticated shrimp (DB1, DB2, and DB3). The selected DGGE bands were sequence to identify bacteria (A) and DGGE profiles were clustered using UPMGA based on Pearson correlation (B).

Shrimp culture tends to now be developed intensively with upgraded technology for higher and successful production.In many occasions shrimp culture