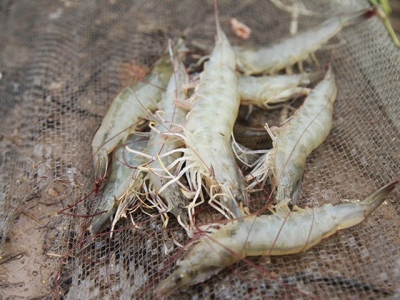 Shrimp culture tends to now be developed intensively with upgraded technology for higher and successful production.In many occasions shrimp culture are affected by various diseases and experienced in loss of crop or reduced the production level by various reasons, writes Mr Prakash Chandra Behera, India.

Shrimp are actively “grazing” on the substrate present in the pond bottom and water column. Therefore, they highly expose to exchanges of microflora between the environment and the digestive system. This increases the risk for the proliferation of an unfavorable gut microflora or frequent destabilization of the microflora, which can affect the optimal functioning of the digestive system.

Furthermore, the digestive system of shrimp is the main entry port for protozoan, bacterial and viral infections, which remain a major risk for the profitability of shrimp production. Presently these are the most important Gut track diseases in shrimps:

Accompanying acute hepatopancreatic necrosis disease (AHPND) in cultivated shrimps has been an increasing prevalence of vermiform, gregarine-like bodies within the shrimp hepatopancreas (HP) and midgut. In high quantity of these bodies result in white fecal strings and a phenomenon called white feces syndrome (WFS).WFS appears in shrimps from approximately 2 months of culture onwards and caused by gregarines .The vermiform bodies formations are consisting of Aggregated Transformed Microvilli (ATM).The ATM have originated by sloughing from epithelial cells of the shrimp hepatopancreatic tubules. They accumulate at the HP-midgut junction before being discharged within feces via the midgut.

When the occurrence of ATM is severe, it can lead to the formation of white fecal strings in shrimp .The high density stocked shrimp pond exhibit this phenomenon and it lead to floating fecal strings or sometimes accumulate in floating mats (i.e., white feces syndrome or WFS). However, ATM sometimes occur together with shrimp hepatopancreatic diseases such as the AHPND, other types of vibriosis, and parasitemia with the microsporidian Enterocytozoon hepatopenaei.

The impact of white fecal matter has been found in L. vannamei & P.monodon culture shrimps and there is no possible association with Loose shell syndrome. The severity of the problem due to occurrence of white fecal matter has been observed to be a serious problem during the culture shrimps. Interestingly, the problem has been observed with the L. vannamei ponds having high count of blue green algae.

Gross signs of WFS in shrimp cultivation pond included white to somewhat yellow, floating fecal strings that sometimes collected in mats or could also be found on feeding trays .The midgut junction and midgut are distended and filled with white to yellow-golden contents .When the contents of the gut or fecal strings are examined , they consisted of masses of vermiform bodies the superficially resembled gregarines .

Severely affected ponds exhibit reduction in shrimp survival by 20–30 percent when compared to normal ponds. There is also a decreases in feed consumption, growth rates and reduces in average daily weight gain (ADG).

Whitish muscle disease of Penaeus vannamei in early disease occurs mostly in the shrimp's tail whitish. Also began to appear whitish from the middle of the back and the whitish part of the loss of transparency Then this diseases forward the development of rapid spread of shrimp in serious condition muscles throughout the back White necrosis. Began to appear the complete white muscle necrosis, the shrimp may die after 3-5 days. White muscle necrosis shows under microscopic examination such as muscle fiber disorders and stripes clearly. Disease is difficult to see the surface of the pond shrimp, dead shrimp submerged in the underwater, early onset of normal feeding, after death, before the muscles become whitish red.

The WMD (White muscle disease) is observed at most of shrimp farms .The epizootic of WMD is showing mortalities ranging from 30% to 100% . The first sign related to this disease is the poor feeding (mineral deficiency in water, poor quality feed) and lethargy of the prawns especially during the first 5 days of PL settlement resulting in slow mortality. The signs are focal to extensive necrotic areas in tail muscle tissues, displaying a white, opaque appearance.

Gross signs of the disease are similar to the WGD. It is likely that the involvement of the Gram-positive cocci, Lactococcus garvieae in WMD could possibly have been a secondary infection. The disease progressively destroyed the abdominal muscular organization of the prawns especially the striated muscles finally leading to mortality.

The white gut disease (WGD) observed in shrimp farms and Vibriosis is one of the major disease problems agent in aquaculture. Vibriosis is a bacterial disease responsible for mortality of cultured shrimp worldwide. Vibriosis is caused by gram-negative bacteria in the family Vibrionaceae. Outbreaks may occur when environmental factors trigger the rapid multiplication of bacteria already tolerated at low levels within shrimp blood or by bacterial penetration of host barriers. The exoskeleton provides an effective physical barrier to pathogens trying to penetrate the external surface of crustaceans, as well as the foregut and hindgut.

The occurrence of five types of diseases: tail necrosis, shell disease, red disease, loose shell syndrome (LSS) and white gut disease (WGD) is by Vibrio spp. in shrimps. Among these, LSS, WGD, and red disease caused mass mortalities in shrimp culture ponds. The diseased shrimp showed symptoms of stunted growth and opaque white gut visible through the transparent cuticle as a white streak. The shrimp consumed feed in large quantities and released fecal matter in the form of a white fluid material. Mortality rate in affected ponds leads in high.

(Microsporidian infection of the abdominal muscles of Shrimps)

Shrimps have purplish-mauve coloration on the cuticle and to have large white tumors or cysts in the muscle. Shrimps have a disease known as cotton or milk shrimp caused by a parasite infection of primarily the abdominal muscle. The muscle has a cottony appearance, which is externally visible as white opaque patchy areas under the carapace. The disease is caused by a severe infection of parasitic microsporidia. The white mass is not a cancerous tumor or cyst but is caused by hundreds of microscopic parasites. The presence of the parasite can elicit a host response by the shrimp that leads to a buildup of blue-black pigmentation in the cuticle.

Effective management of the health of shrimp requires consideration of delicate balance between the host, pathogen and environment. Disease and production problem are vary during the different phase of shrimp culture. Production shortages resulting from shrimp mortality, slow growth and high FCR occur and affect the economics of shrimp farms.

Most often pathogens are present in association with the environment and shrimp are apparently healthy and show normal growth. Often conditions such as high stocking density, poor water quality, and sudden changes in environmental factors precipitate diseases in shrimps. Some of the important strategies for gut health management have been outlined below:

A synergistic blend of herbal extracts has the bacteriostatic and bactericidal properties against pathogenic and potentially pathogenic bacteria. Furthermore, this synergistic blend has proven to be a powerful interrupter of bacterial and effectively modulate for the gut flora.

The presence of a synergistic blend of phytobiotics provides an array of antimicrobial activities in the shrimp’s digestive system. This offered additional protection against co-infections with opportunistic bacteria such as vibriosis.

Avoidance of pathogens: This can be done through selection of specific pathogen free broodstock, exclusion of carrier animals in culture systems, screening of healthy and disease free shrimp brooders ,nauplii and larvae through quarantine systems ,stocking of SPF /SPR seeds ,filtration and sanitization of water before intake.

Improving host conditions through good nutrition and immunostimulation: A number of microbial molecules such as feed additive probiotic, b 1,3 glucans, peptidoglycans, polysaccharides have been shown to stimulate the non-specific immune mechanisms in shrimp

Improving environmental conditions: The environment has a greater role and significant impact on shrimp health, growth and production .Most disease problems are triggered by deterioration of water and soil quality. Application of probiotic can capable of oxidizing toxic wastes and be useful in improving soil & water quality in shrimp culture ponds.

Biosecurity: The biosecurity systems have used in aquaculture as well as for regulations and policies to prevent and control the spread of diseases. The key elements of biosecurity are a reliable source of stocks, adequate detection and diagnostic methods for excludable diseases, disinfection and pathogen eradication methods, best management practices, and practical & acceptable legislation. Hence, the strict principles and guide lines of biosecurity to be adapted in individual farms and cluster wise in farming areas.