Tuna prices are at a high record 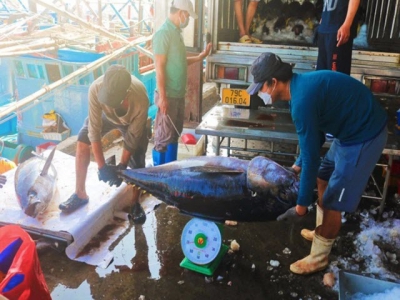 Currently, tuna prices in Khanh Hoa province are purchased by traders from VND 145,000 -149,000 per kilogram of 30-head or more sizes. These are the highest prices in recent ten years.

According to the ship owners, most fishing boats caught 25-30 tunas (approximately 1 tonne of fish) on this trip at an average level compared to the same time every year. Therefore, the fishermen are not satisfied with the catch because now it is in the tuna fishing season.

Fisherman Tran Van Hieu, captain of ship KH 99988 TS, in Vinh Phuoc ward, Nha Trang City, said that the tuna caught by fishing boats had decreased sharply in the past two years. Mr. Hieu's two trips to the sea at the beginning of this year's season both had a low yield of tuna, but this time, the output increased but was only about 1 tonne of fish on average.

Fisherman Hieu's boat this trip caught 26 tunas, including one weighing up to 80 kilograms, with the number of over tonnes of fish low compared to the same time every year.

With the price of fish currently paid by traders from VND 145,000 -149,000 per kilogram for 30-head or more sizes (small type is about VND 120,000 per kilogram), an increase of VND 15,000 -20,000 per kilogram compared to the previous trip and the highest is about ten years back. After deducting the cost of the ship, fisherman Hieu made a profit of about VND 30 million.

"Despite the high price of fish, the catch is low, while the cost for the sea voyage increases by about VND 120 million, so fishing vessels with an output of less than 1 tonne of fish only return capital or make insignificant profits," said the fisherman. Hieu shared and added, "This sea also has few ships catching a lot of tuna. The whole fleet of dozens of ships clings to the sea, but only 5-6 ships can produce about 2 tonnes of tuna."

Just docked and sold fish on January 16, fisherman Phan Thai Anh, the ship's owner, the captain of the KH 90116 TS ship (Nha Trang City), said that tuna prices had increased sharply, the fishermen are very excited. But unfortunately, this trip of Mr. Anh's fishing boat did not catch a lot of tunas.

British fishermen also said that the boats caught an average of 20-30 tunas for most of this trip. Like a British fishing boat, 20 tunas are about 800 kilograms. Thanks to the tuna prices purchased, the ship escaped a loss.

Mr. Le Dang Tien, Deputy Manager of Hon Ro fishing port, said that since January 15, there had been dozens of tuna fishing vessels in Khanh Hoa returning to the port. Compared to the previous two sea voyages, this trip fishing boats with higher output, averaging 1 tonne per vessel. However, with this output, even though tuna prices of mackerel are high, nearly VND 150,000 per kilogram, the boats only make a profit of VND 20-30 million VND.

Tuna prices increase because of lack of raw materials

According to tuna purchasing enterprises, fish prices are increasing sharply due to the severe shortage of raw materials for processing by factories. Along with that, the export market of tuna to countries such as the US, Canada, Europe...also increases strongly. Since then, tuna processing and exporting enterprises have competed to push up the price of mackerel purchased for processing to meet orders.

It is known that the primary tuna fishing season will last from now until April next year. In the face of high tuna prices, many tuna fishing boats in Khanh Hoa province will cling to the sea through Tet.

Mr. Vo Khac En, Deputy Director of Khanh Hoa Fisheries Sub-Department, said that the province has about 720 offshore fishing boats, of which 190 are catching tuna. It is expected that there will be about 100 tuna fishing boats clinging to the sea through Tet in the upcoming future.

At Phuoc Dong Fisheries Union (Nha Trang City), it is expected that 20/32 ships will stick to the sea through Tet to catch tuna. The remaining ships are large ships, the cost of the trip is high, along with difficulties in finding people to go with, so they have not decided to go to sea.

However, according to fisherman Mai Thanh Phuc, Chairman of Phuoc Dong Fisheries Union (Nha Trang City), with the current price of tuna from VND 145,000 per kilogram or more, fishermen are excited, and fishing boats are looking forward to pushing off. For a long time, the price of fish has remained at the level of VND 110,000-120,000 VND per kilogram, and fishing boats are easy to lose and difficult to remove costs. Because the catching quantity of seafood, especially tuna, is now deficient compared to before.

Accordingly, ships that come back from the sea from 20-25 days are lucky to get from 1.5 to 2 tonnes, and on average only with an output of 800 kilográm to 1 tonne. In contrast, the cost of a trip to the New Year is usually 20% higher than that of a regular voyage, about VND 120 million.

Pangasius exports to Russia interrupted due to conflict

Russia is a potential market for Vietnamese pangasius, however, the conflict between Russia and Ukraine is disrupting pangasius export to this market.

Imports of Thailand’s seafood into Australia decreased significantly in 2021, while imports from Vietnam showed a sharp increase.