The benefits of organic matter 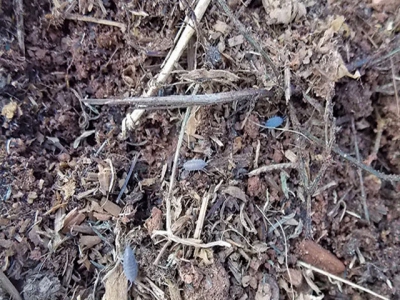 When the soil contains sufficient organic material, farming becomes far easier and less risky. In contrast, in a chemically based system, the interaction between the minerals becomes critical and complex, and a farmer needs a great deal of experience and knowledge to get good results.

Organic soil in the making. Manure and crop residue are being shredded by these wood lice and a host of underground organisms and will gradually turn into humus. Photo: Bill Kerr

To some extent, the soil becomes self-regulating. The beneficial organisms predominate and suppress the harmful organisms or pathogens, such as eelworm

The relationship between soil organisms, humus and plant health is greatly underrated.

After six years of agricultural education and 40 years of practical vegetable farming, the benefits of this relationship eluded me until I started breeding plants on my own land.

During the first phase of my career, my vegetables were planted in chemically fertilised virgin soil and frequently suffered from disease: the carrots were badly infected with Rhizoctonia, the beans were targeted by both Rhizoctonia and Pythium, and all crops were infected with severe root knot eelworm.

When I converted to cattle manure and no-till, the organic content and physical structure of the soil improved.

I still find the occasional eelworm, but no Pythium or Rhizoctonia, and, unexpectedly, no more rust on beans. This even became a problem for me as it was difficult to selectively breed for rust resistance!

Another major benefit of using manure and no-till is that the soil forms aggregates, which are small clusters of soil particles held together by humus.

Humus also acts as a sponge, and ensures that water is retained by the soil before draining through the profile, taking with it nutrients. Humus-rich soil can sustain a crop for a few weeks longer than soil with low humus content.

The problem of clods and cultivation

Cultivating a crop in humus-rich soil is far easier than in low-humus soil. It will help you save fuel and reduce soil compaction and clod formation.

Clods have a distinctly different microclimate.

They are often impervious to roots, which prevents the plant from accessing the nutrients in them. They are also a source of pathogenic organisms.

The more you cultivate soil, the faster you break down the humus and soil structure. While soil does need aeration, too much is destructive. Tillage should be strategic and carried out only for certain tasks, such as removing weeds, loosening the soil to plant a crop, or breaking hard layers in the soil profile.

Keeping tillage to a minimum will cut costs and preserve humus.

Over-aeration stimulates soil organisms to feed on the humus, which releases nitrogen into the soil. This is beneficial in the short term; in the long term it is detrimental to organic content and the benefits this provides.

Late-planted feed crops in the US may see harvest challenges from weather, moisture levels, drying costs and quality, says analyst.

Here are some guidelines for growing vegetables under drought conditions.