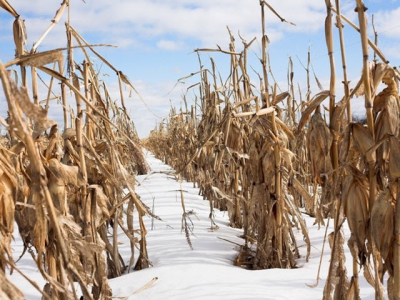 Late-planted feed crops in the US may see harvest challenges from weather, moisture levels, drying costs and quality, says analyst.

The US Department of Agriculture released information​​ regarding the ongoing harvest and planting of feed crops on Tuesday [November 12]. Overall, the harvest pace for both corn and soybeans has been slower than in previous years.

Despite production challenges, the expectation is that feed crops will be harvested, said Todd Hubbs, clinical assistant professor, agricultural commodity markets with the University of Illinois.

Little information has been shared at this point about the yields of late-planted crops, although the yields of crops planted earlier have been slightly down from last year, he said. “With the later stuff I think moisture content, dry down costs could be a big problem and there may be test weight problems, but we’ll have to wait and see."​

“I think there’s going to be dockage on lower-quality corn, but haven’t heard any issues on that yet,”​ he told us. “I suspect we might hear some of that over the next few months.”​

Producers in the western Corn Belt may have faced fewer challenges planting their crops but have had weather issues this autumn starting with an early frost and winter storm event in October, he said.

The eastern Corn Belt has had some moisture, which slowed the cutting of feed crops, Hubbs said. “It got a little wet, so there’s still a lot of corn standing,”​ he added.

Production challenges and market uncertainty are also making it harder for some producers to decide what to do next year, he said. “They’re still trying to get their harvest done this year – it’s really delayed, I mean there will be people in fields maybe into January or later,” ​he added.

“The wild card is South America’s crop – they’ve had delayed planting in a lot of places in Brazil in [relation to] soybeans,” ​he said. “If that crop gets shorted, or they have problems with their second corn crop the dynamics change.”​

Across the 18 states responsible for the majority of the US corn crop, the harvest has passed the half-way point, but lags the pace set in previous years, the USDA said.

Last year, at this time, about 83% of the crop had been collected, and on average, about 85% has been gathered, the department said. This year 66% has been harvested.

Only two states have seen an end to their corn harvest – North Carolina and Tennessee, the department said. Similarly, only Colorado and Kentucky have managed to outpace the rate of harvest set last year and on average.

However, Michigan, North Dakota, South Dakota and Wisconsin all reported that less than half the crop in those states has been collected, the department said. With 15% harvested, North Dakota has had the slowest pace.

Alternatively, this year’s sorghum harvest has outpaced both last year and the multi-year average, the USDA said. About 88% of the crop has been collected, up from 80% on average.

With 100% gathered, Texas has made the most progress, while at 64% harvested, South Dakota has had the slowest pace, the department said.

Although continuing to trail the average pace of harvest, soybean collection is coming closer to the pace set last year, the USDA said.

On average, about 92% of the crop is in by this time, and last year about 87% had been collected – this year 85% has been harvested, the department said.

Across the 18 states responsible for the majority of the soybean crop, only Louisiana has completed its harvest, the department said. However, Kentucky, North Carolina and Tennessee have improved their pace of harvest compared to the established multi-year average.

No state has more than half its crop still in the field, but five states have at least a quarter of the crop to collect, the department said.

The planting of winter wheat has not had the same delays faced by spring-planted feed crops and about 92% of the crop is in the ground – up from the 88% that had been planted by this time last year, the USDA reported.

Of the 18 states responsible for the majority of winter wheat acres, California has planted the smallest amount of its crop, the department said. However, five states have completed their plantings.

Keeping pace with last year, but behind the multi-year average, about 78% of the crop has sprouted, the department said.

Crop quality is similar to last year’s crop at this point, the department said. Both last year and this year about 54% of the crop earned good or excellent scores.

The pH of soil is a reflection of its acidity or alkalinity. In the absence of base minerals such as calcium (Ca), magnesium (Mg), potassium (K) and sodium (Na)