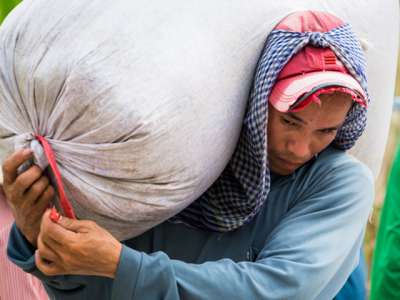 Vietnam’s rice price in the first two months surged 18.2 percent year-on-year to $547.9 per ton, but with lower volume in most markets.

A farmer carries a bag of rice in the southern city of Can Tho. Photo by VnExpress/Thanh Tran.

The Philippines remained the largest importer but with volume down 28 percent year-on-year to 256,000 tons.

Other markets that saw volumes drop by double-digits include Malaysia (–75 percent), the United Arab Emirates (–56 percent) and E.U. (–23 percent).

Strong rises in volume were seen in Taiwan, up 80 percent, and France, up 47 percent.

Vietnam’s rice exports grew by 9.3 percent last year to $3.07 billion, according to the Ministry of Industry and Trade.

Black pepper price increases due to shortage of supply

Vietnam exported $256 million worth of cassava and cassava products in the first two months of the year, a 77.9 percent year-on-year increase