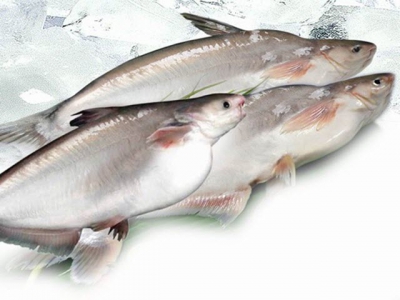 Diets based on soybean meal (SBM) have typically been considered the standard in the channel catfish industry, and such diets are considered to be of “high” quality. However, other less expensive protein sources, such as CSM, are routinely used to replace part of the SBM. Based on current data, it appears that CSM can replace at least half of the SBM in catfish diets without negatively impacting fish performance (Robinson 1991; Robinson and Li 1994, 2008).

This study was not designed to compare SBM- and CSM-based diets, but to evaluate the dietary protein level that was adequate using “lower” quality diets based on CSM and corn gluten feed. However, some inference to the use of CSM in channel catfish diets can be drawn. That is, the data on low-protein, CSM, and gluten-based diets generally agree with previous studies in that CSM can be used in rather high levels in properly balanced diets for channel catfish (Robinson 1991; Robinson and Li 1994, 2008).

In regard to the primary objective, linear regression indicated a general improvement in weight gain and FCR as dietary protein increased. However, individual treatment means suggested that there was no significant difference in weight gain of fish fed 22 per cent dietary protein and those fed higher levels of protein; also, FCR was not significantly different among groups of fish fed 20–28 per cent dietary protein. These data are similar to those from a previous study on low-protein diets for catfish (Robinson and Li 1997). Based on weight gain and FCR, it would appear that diets containing as low as 22 per cent protein might be adequate for channel catfish.

However, carcass and fillet yield are generally reduced when catfish are fed lower protein diets. This is because a significant increase in body fat is typically observed in fish fed diets containing less than 28 per cent dietary protein (Robinson and Li 1997). However, Study 3 showed no statistical body fat differences in fish fed the various diets because of a high variation among ponds. The trend was that fish fed lower protein diets generally had more body fat.

Considering the negative impact on product quality if dietary protein is too low, it may be prudent to feed diets containing no less than about 28 per cent protein. However, if feed prices continue to increase and fish prices remain static, more marked changes in dietary protein may be warranted.

Corn grain has long been considered a necessity in catfish feeds primarily because it is generally a reasonably priced source of starch, which is needed to make the feed float, and it is also a relatively inexpensive source of energy. However, with the recent dramatic increase in the price of corn, there is interest in reducing the amount of corn used in channel catfish diets.

Channel catfish generally grow well when fed high-quality diets containing as little as 24 per cent protein. However, as dietary protein decreases, body fat increases, which typically decreases processing yield. A possible solution to this issue is to start the fish on a low-protein diet and then finish them on a diet containing higher levels of protein for a specified period of time before harvest.

Another study conducted on the use of finishing diets for channel catfish did not show any benefit to using finishing diets (Robinson 1994). However, this was likely due to the fact that 28 per cent protein was the lowest level of dietary protein used in the previous study. The reduction in processed yield typically observed in channel catfish fed 28 per cent protein diets compared with fish fed higher protein diets is usually small, and in some cases there are no differences.

However, this might be explained by the fact that the diets used in the earlier studies were of higher quality than the 24 per cent protein diet used in this study. Although we do not have the exact composition of the proprietary formulation that we used, we do know that it contained high levels of corn gluten feed and it did not contain animal protein.

Reducing the amount of corn grain to less than 15 per cent of the diet increased FCR in channel catfish fed CSM-, gluten-based diets. Floatability of the diet may also be reduced when corn grain is reduced to low levels.

Starting channel catfish on a 24 per cent protein diet and feeding a higher protein diet (28 per cent or 32 per cent) for 60 to 90 days before harvest appears to be a valid strategy for maintaining body fat and processed yield in acceptable ranges.

Acoustic deterrent devices (ADDs) that are considered to cause disturbance to European protected species, such as seals, will no longer be used by salmon farmer

The oral vaccine that aims to tackle Streptococcus in tilapia

An oral vaccine that protects tilapia from Streptococcus infection is due to be trialled on farms before the end of the year.