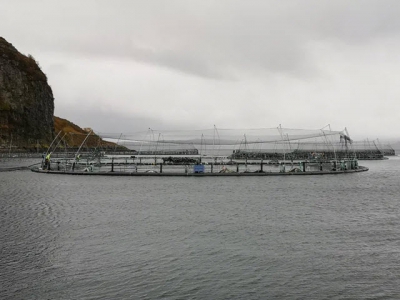 Acoustic deterrent devices (ADDs) that are considered to cause disturbance to European protected species, such as seals, will no longer be used by salmon farmers in Scotland.

ADDs are used by a number of marine sectors, including aquaculture, offshore construction and engineering, to deter marine mammals from installations. The devices use underwater transducers to create a temporary sound fence around a pen or farm. They can use random frequency sweeps and tones to unsettle approaching animals or produce sound at specific frequencies and volumes to cause discomfort to an approaching seal.

In 2020 more than 500,000 Scottish farmed salmon were killed in seal predation attacks. Farmers have a moral and legal responsibility to protect their fish, and are no longer able to shoot seals as a last resort in the protection of their livestock, following a change in the law introduced at the end of January. ADDs are used by many salmon producers as part of the toolkit for managing predation by seals, in conjunction with other deterrent technologies and innovations including anti-predation netting, seal blinds and new net tensioning methods.

The SSPO’s new decision means that the only circumstances in which Scottish salmon producers will use ADDs in future is where the devices comply with both Marine Scotland and US Marine Mammals Protection Act requirements and operators have been provided with evidence from suppliers of the devices’ compliance.

This announcement by the SSPO coincides with a Marine Scotland report into ADDs to be laid before the Scottish Parliament today. Scotland’s salmon farmers are awaiting guidance from the Scottish Government and the US on the use of predation devices.

Anne Anderson, director of sustainability for the Scottish Salmon Producers Organisation (SSPO), said: “Scottish salmon farmers are not using any acoustic deterrent devices that may have been considered to endanger cetaceans such as dolphins, porpoises and whales. All devices the sector does not have total confidence in, with regards to the harming of protected species, have been turned off and removed from the marine environment.

“It is critical, however, that farmers have deterrents available to protect their livestock from seal predation. As such the Scottish salmon farming sector is committed to, where necessary, only using acoustic devices that have been scientifically proven to be compliant with the US Marine Mammals Protection Act (MMPA).”

“We call on Marine Scotland to work with the sector to develop a science-led approach which enables the use of deterrent devices and supports research and innovation in this area to ensure that farmers can continue to deploy these tools, which play a useful role in managing seal predation and improving animal welfare.

“Scotland’s salmon farmers are committed to farming in the most responsible way. This announcement illustrates our commitment to long-term sustainability.”

The news has been welcomed by Nathan Pyne-Carter, chief executive of Ace Aquatec – one of the UK’s most popular ADD providers. He said: “Our cutting-edge deterrent innovation has been supported by a number of Scottish Government grants, including from SMART: Scotland and Cefas, to help us bring to the market an alternative to the previous style of devices. We are pleased to hear that the industry has committed to use next generation deterrents like those that we manufacture in the UK and distribute globally.

“Scottish fish farmers have a legal and moral duty to protect the welfare of their fish and the losses caused by seal attacks can have a significant financial and operational impact on a key Scottish sector which is currently also facing many other challenges.

The Health and Welfare of Atlantic Salmon course

It is vital that fish farm operatives who are responsible for farmed fish are trained in their health and welfare. This will help to ensure that fish are free from disease and suffering whilst at the same time promote good productivity and comply with legislation.

“We are pleased that our devices have secured MMPA compliance and we are committed to working with the Scottish marine and aquaculture sector for further research into the use of ADDs and animal safety. We also have a SAIC grant currently ongoing to look at underwater sound propagation and the use of artificial intelligence triggering systems. We look forward to working with new and existing customers to help them protect their fish in a humane and responsible way.”

The future of tilapia aquaculture: an insider's perspective

Adam Taylor, founder of the largest tilapia producer in Africa, sees huge scope for improvements in the sector - in particular driven by advances in nutrition