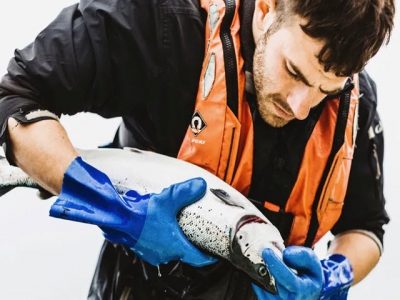 A new research project hopes to develop a treatment for amoebic gill disease (AGD) by exploiting a vulnerability in the parasite that causes it.

If successful, they could safeguard the sustainability and welfare of farmed Atlantic salmon, while also driving down the cost of treating debilitating parasitic infections in the developing world.

A research project from the University of Glasgow hopes to repurpose existing parasitic drugs and see if they can be used to treat amoebic gill disease in Atlantic salmon. The researchers, led by Dr Martin Llewellyn and Professor Mike Barrett, will use the university’s drug discovery pipeline to identify compounds that can kill the parasite that causes amoebic gill disease in the lab. The team will then test the potential drug in farmed Atlantic salmon, tracking both the drug’s efficacy and its impact on the surrounding ecosystem.

Finding an effective and environmentally sustainable treatment for amoebic gill disease would be a boon for salmon aquaculture. Dr Llewellyn believes that introducing existing anti-parasitic drugs in a new industry would drive down the cost per use significantly.

However, the discovery could bring major human health benefits along with it. Many of the drugs he and his team are testing can treat parasitic trypanosomatid infections in humans – diseases like leishmania, sleeping sickness and chagas disease. These diseases affect the lives of more than 200 million people across the globe. The potential price reduction could make drug therapies more accessible for people in developing countries.

What is amoebic gill disease?

Amoebic gill disease presents a unique challenge for the salmon aquaculture industry. The two primary treatment options are putting affected salmon into freshwater baths or exposing them to hydrogen peroxide. Neither of these treatments work particularly well – gill lesions can reappear within days of therapy and researchers note that exposing marine fish to freshwater and hydrogen peroxide causes osmotic stress, which raises welfare concerns.

Developing an effective and ecologically neutral treatment for AGD could revolutionise the industry. It would allow producers to safeguard salmon welfare, shore up farm productivity and ensure the sector’s sustainable growth.

Though AGD parasites are notoriously difficult to treat, they have some key vulnerabilities. The parasite contains an endosymbiont – a cooperating micro-organism that lives within the body of the parasite in a mutualistic relationship.

The good news is that perkinselas, which are a type of kinetoplastid, are susceptible to a variety of trypanocidal drug therapies. Researchers just don’t know which could treat AGD. Kinetoplastids live in a wide variety of other parasites and have similar behaviour and metabolic functions regardless of whether they are in fish, livestock or humans. This means that if the researchers can figure out how to weaken and kill perkinselas in fish, they could potentially kill perkinselas in humans suffering from parasitic infections.

From the lab to the ocean pen

To develop the treatment, Dr Llewellyn and his team will use the trypanocidal drug discovery pipeline at the University of Glasgow to see what compounds impact kinetoplastids in vitro. After identifying potential drugs, the team will test them in farmed salmon at a production site on the west coast of Ireland.

The team will measure the treatment’s efficacy and monitor key welfare indicators in the test subjects. They also plan to test the potential drug along with freshwater treatment to see if that creates a stronger therapy. The team plans to assess the environmental impacts of the potential treatments by measuring sediment accumulation and tracking water dynamics around the farm site.

Dr Llewellyn explains that by repurposing existing trypanocidal drugs for aquaculture, the industry can skirt the high development costs and licensing difficulties that accompany new drug therapies. The team also hopes that by using trypanocidals in a new industry, an economy of scale could develop – making the drugs cheaper and more accessible for everyone.

If Dr Llewellyn and his team are successful, they could tackle one of the biggest disease challenges in aquaculture and develop an inexpensive way to kill the causative agents of multiple tropical illnesses in humans in the process.

The freshwater catfish (Pangasius hypophthalmus) is an indigenous fish species in high demand from global consumers.

The aquatic chicken - tilapia genetics and their parallels with poultry