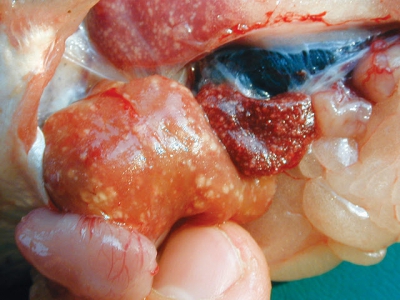 The clinical signs of Edwardsiella ictaluri infection in pangasius are numerous white spots on the kidney, spleen and liver.

As in other developing aquaculture ventures, health problems that include disease outbreaks from parasites and bacteria have been encountered. For pangasius, the most important disease problems are caused by the bacteria (Edwardsiella ictaluri), (Aeromonas hydrophila), (A. sobria) and (A. caviae).

BNP shows few external signs at the beginning of the infection. Clinical signs are encountered immediately before death. Fish swim slowly at the surface of the water and when examined show pale color on skin and gills, and internal white spots on the liver, kidney and spleen.

The disease peaks during the rainy season, when temperatures drop below 28 degrees-C. In general, crowding, mixing and adverse climate conditions are considered risk factors for the development and spread of BNP. Today, the disease is widespread in the Vietnamese Mekong Delta and is difficult to avoid.

Careless treatment has unfortunately resulted in antimicrobial resistance in E. ictaluri treated with oxytetracycline or sulfonamides. Further studies are needed to establish the status of antimicrobial resistance and the transfer of genetically mobile antibiotic-resistant genes in pangasius-farming environments. To control the disease, further research on its pathogenesis and epidemiology, and the development of vaccines against E. ictaluri are needed.

Red spot disease. In fish affected with red spot disease, a group of motile Aeromonas species – Aeromonas hydrophila, A. sobria and A. caviae– causes general septicemia. The gross clinical signs associated with the condition are the presence of hemorrhages on the head, mouth and base of fins; a red, swollen vent; and pink to yellow ascitic fluid. Sometimes gas in the gut can be observed.

This infection often occurs at the change from dry to rainy season, especially during periods when fish are stressed during handling and transportation. Reducing stocking density and maintaining high-quality health management can significantly reduce the incidence of this bacterial problem in fingerlings and grow-out fish in ponds. 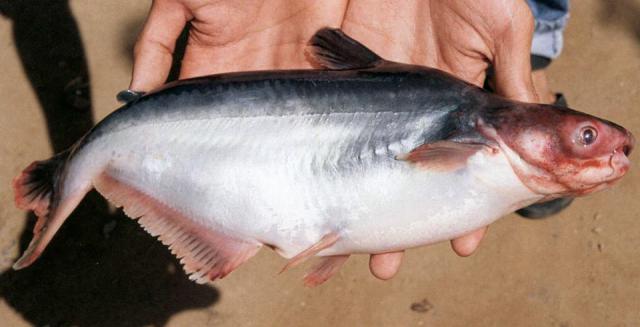 Aeromonas infections in Pangasius catfish cause petechial hemorrhages on the head, around the mouth and on the base of fins. Often the abdomen is enlarged with pink to yellow fluid.

Monogenea. The Monogenea group includes several gill and skin parasites that belong to (Thaparocleidus). They cause a seasonal incidence of symptoms, with heavy infections in both pond- and cage-cultured pangasius during the rainy season or periods of cooler weather.

The signs of disease include swimming slowly at the water surface, sloughing of mucus to try and remove the parasites and pale, swollen gills. Infected fish have a reduced appetite and as a consequence become weak and vulnerable to bacterial infections. Sporadic outbreaks can occur with low mortality. Treatment with formalin is effective. 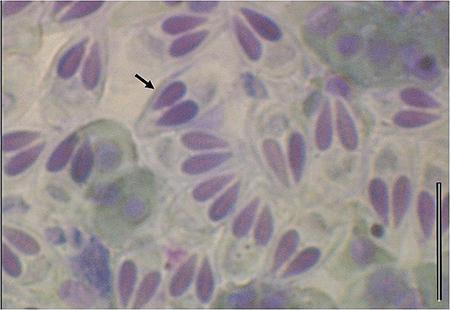 Myxobolus endoparasites can be observed on internal or external organs. Signs of their presence include white cysts containing spores (arrow) in the kidneys and gills.

Trichodina and Epistylis species, the most common parasites of pangasius catfish, cause heavy infections responsible for mortalities during the nursing period. Infections can be observed year round but are heaviest when climate conditions are unstable, such as when downpours of rain are followed by periods of sunshine. The parasites are encountered most in ponds with high stocking densities and poor water quality.

The primary symptoms of infestation include breathing difficulties accompanied with anorexia, a dark coloration but with pale gills, fish swimming on the surface, flashing or movement through plants, and in serious cases, fin erosion. Copper sulphate or formalin can be used as a treatment. Generally, disinfection is an effective way to control the parasites.

White spot disease. White spot disease is caused by the ciliated protozoan Ichthyophthirius multifiliis. Fry swim slowly and mortalities are high within five to seven days when water temperatures are 25 to 28 degrees-C. Clinical signs are white spots less than 1 mm on the skin and gills. This ectoparasite is difficult to treat.

Microsporidians. Microsporidians cause disease by obligate intracellular parasites. Occasionally, they infiltrate the muscles and viscera of cultured catfish. Although microsporidians are not regarded as important catfish parasites, the presence of certain species can significantly reduce the quality and appeal of fillets.

Myxobolus, Henneguya. (Myxobolus) species and (Henneguya) species belong to the Myxozoa and are commonly found on pangasius catfish. White cysts containing spores can be seen on internal or external organs with notable infections in the kidneys and gills. Infections are widespread, but there is no effective treatment. The disease can be controlled by drying and liming ponds to remove the intermediate oligochaete hosts.

Trypanosoma. The flagellate blood parasites of the Trypanosoma species are frequently found in farm-reared P. hypophthalmus. Flagellate infections do not produce any apparent pathological changes in the fish, and are therefore of questionable pathogenicity.

Balantidium, Ichthyonyctus. Balantidium and Ichthyonyctus species are ciliate protozoa found in the large and posterior intestines of juvenile and adult pangasius catfish. The pathogenesis of the organisms in pangasius is unknown. No therapy is applied.

A number of intestinal parasites have been found in or in close association with the guts of pangasius, including the nematodes and digeneans. However, further study is required to identify these more fully. 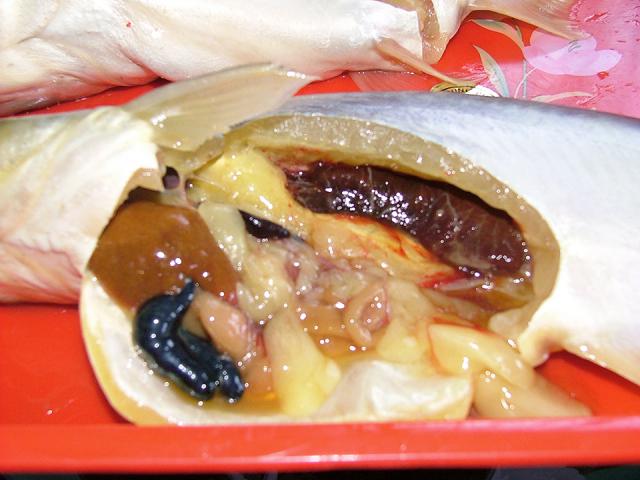 Signs of yellow fillet syndrome in Pangasius include discoloration of the fillet, pale light-yellow gills, yellow brown-green liver and a dark spleen. Yellow fluid is often encountered in the body cavity.

Red fillet syndrome. Red fillet syndrome affects adult catfish. It is usually defined by red spots in fillets, which consist of small petechial hemorrhages. Affected fish are unmarketable because they are regarded as poor quality by processors. The red spots disappear if the feed ration is reduced or stopped for at least one week and the water quality is improved, suggesting an environmental and/or feed related problem. No etiological agent was detected from histology samples.

The gross clinical signs are anemia, weight loss, ascites and a yellowish discoloration of the fillets. Monitoring dissolved-oxygen levels several times a day and throughout the night is a routine practice in all ponds. The use of mechanical aeration with pump sprayers, large paddlewheels and diffused air systems – common during the flooding season in heavily stocked culture ponds – reduces the problem.

Mozambique’s fishery authorities say they are on high alert for a potential outbreak of red spot disease after a recent outbreak in neighbouring Malawi.