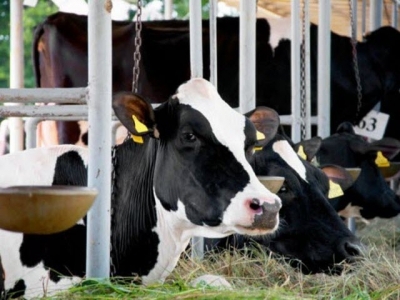 Trouw Nutrition researchers say they are continuing to glean insights into the effects of early nutrition and management on the development of the dairy cow.

The company, which is the animal nutrition division of Nutreco, held a conference this week to disseminate some of latest findings from research conducted within the remit of its calf nutrition program – LifeStart.

We caught up with Trouw Nutrition researchers, Leonel Leal and Harma Berends, to hear more.

Leal said the team’s longitudinal study, currently in progress, has shown the early and mid-term benefits of the LifeStart methodology. So far, they have discovered dietary interventions in the first two months of a calf’s life can lead to profound metabolic adaptations.

“What we have been doing in the past few years is trying to understand the mode of action for a cow’s productivity responses to receiving LifeStart levels of milk replacer ​(1.2 kg/d)​ in the first two months of its life​.”​

An increase in the size of the cow’s mammary gland and other organs was a previously reported finding when the Trouw Nutrition team looked to explain the LifeStart program’s effects on cow milk production. Leal said while that remains an important clue, they now know that it is not the only shift going on.

“The mammary gland hypothesis is still strong, but it certainly doesn’t tell the whole story.”​

Instead of slaughtering or harvesting the animals to get a close up look at what is happening at the cellular level, he said the team is relying on less invasive techniques. It has coopted methods more typically used on humans and in drug discovery such as metabolomics – the systematic study of the unique chemical fingerprints that specific cellular processes leave behind – and blood sampling.

“In earlier gene expression work, we had also seen that several genes crucial in regulation of energy and protein metabolism were affected in the pre-weaning phase in response to the feeding LifeStart levels of milk replacer to calves.​

“However, [beyond gene switching and organ size] we now have also seen responses such as changes in adipose tissue differentiation, for example an increase in brown-like adipose tissue, which is desirable as it may improve insulin sensitivity and influences thermoregulation as well as inflammatory responses.”​

The team studied two cohorts of animals over that period – one group of calves fed the LifeStart levels of milk replacer (1.2 kg/d) and the other conventional feeding levels (0.6 kg/d) for the first two months of life, with no intervention for nine months afterwards and both groups exposed to similar housing and management in that timeframe.

“We saw that the energy metabolism seems to be affected by the nutrition in early life. There was also a shift in amino acid and protein metabolism in the LifeStart group.That could partly explain the differences found in age at first calving and survival throughout the first 180 days of lactation.”​ ​

The team is looking at calves over their entire lifetime, from birth through to when they drop from the farm, taking a holistic approach that does not just focus on milk production levels, but also examines a whole range of parameters from feed intake, body condition scores, survival, fertility, total lifetime productivity but also in-depth measures on metabolism and insulin sensitivity.

“We need to get full production data to determine the real meaning of the metabolic changes going on,”​ he said.

FEEDNAVIGATOR IS RUNNING A WEBINAR ON DAIRY CALF NUTRITION ON TUESDAY 31 OCTOBER - CLICK HERE TO REGISTER​ AND TO GET THE LATEST INSIGHTS FROM GLOBAL EXPERTS. ​​

What are the desired nutrients in milk replacer?​

Harma Berends told us how research findings show that the nutrient balance in calf milk replacer for the first two months of the animal’s life needs to be adjusted to ensure lifelong resilience in the calf, to accentuate the effects of the LifeStart program, and guarantee consistency in calf response.

“The formulation of many calf milk replacers would no longer be optimal for feeding at a higher plane of nutrition level - calves could be overfed certain nutrients and underfed others, while the energy sources might not be adequate,”​ she said.

She is currently determining what the optimal nutrient inclusion levels in calf milk replacer should be. She is evaluating several aspects like protein:energy ratios, minerals, water balance and protein quality within that early milk supply to the calf.

“For proprietary reasons, I can’t go into specifics, but what we have seen is that there are health benefits from having higher energy inclusion levels in calf milk replacer.”​

However, she said the industry really needs to rethink objectives of calf nutrition.

While professional dairy farms, globally, are adopting the higher plane of nutrition feeding model, they need to focus less on short-term feed efficiency, she said.

Use of clove and rosemary essential oils with encapsulated active principles in feed may reduce oxidation of meat and improve shelf life, say researchers.

Is tree bark the remedy for diarrhea in calves?

Some yeast strains may offer benefit as a feed additive when pathogens or mycotoxins are present in feed, say researchers.