How to handle ammonia spikes when farming shrimp - Part 2 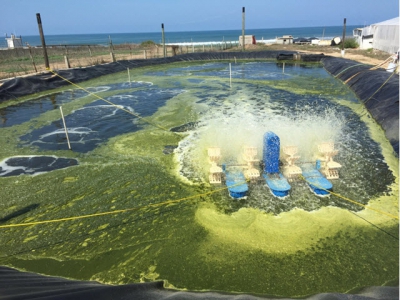 In order to prevent ammonia issues in shrimp ponds, proper management is needed to keep the concentration below the maximum threshold or lethal concentrations. The following are the important parameters for preventing ammonia concentrations increasing.

Weekly measurements are recommended, increasing to daily when problems such as disease or low dissolved oxygen occur. Measurements can be taken with easy to use field kits, an on-site laboratory or third party laboratory. It’s recommended that a laboratory test is used occasionally with field tests to check reliability and accuracy. TAN, nitrite and nitrate, alkalinity, DO, salinity and pH should be measured at the same time.

The main source of ammonia in shrimp culture comes from the feed inputs. One way to prevent ammonia build-up is proper feed management through feeding regime planning. Feeding regimes specify the diet, amount and schedule.

The diet refers to specified feed type – eg live feed or artificial feed – and the protein content, which determines the amount of ammonia released into the water. The amount refers to the feeding rate used in the system. Feeding rate must take into account the amount of biomass and target of average daily growth (ADG). While the feeding schedule is the time and portion of the feed at each feed hour.

Feeding regimes need to take into account the needs of shrimp growth and the capacity of the water and pond bottom environment. This is done in order to prevent overfeeding, which leads to ammonia build-up in the water.

Alkalinity is a measure of the ability of the water body to neutralise acids and bases and thus maintain a fairly stable pH level and stable water environment. The maximum pH fluctuation should not exceed 0.5. It is important to maintain a stable pH at a safe range because it affects the metabolism and other physiological processes of culture organisms. Optimum alkalinity range is 120-200 ppm.

As explained above, pH is an important factor of ammonia ionisation, which determines the toxicity of the ammonia itself. The pH of culture water should be maintained at the optimum pH range between 7.7 to 8.3 units.

As explained above, unionised ammonia (NH3) is toxic to shrimp. The upper limits of NH3 are described in the table below. 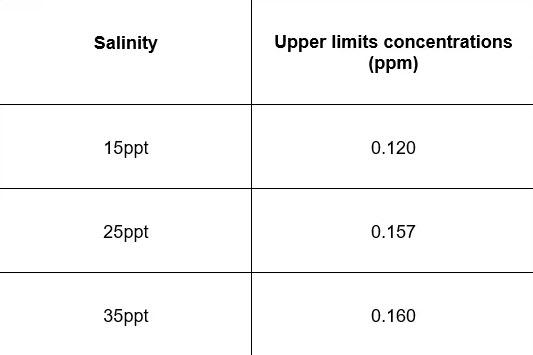 If ammonia concentration in your farm already exceeds the maximum threshold and you see behavioural or physical anomalies – or even mortality – in the cultured shrimp, some important countermeasures are needed. These may act as an immediate treatment and may help to prevent further problems, such as a disease outbreak.

A daily water exchange of 10 to 40 percent from the total volume of water can be done until ammonia concentrations reach a safe level. A thorough water management SOP should be applied when exchanging water, especially where water exchange exceeds 15 percent.

The ammonia build-up might be caused by a low nitrification rate. To combat this, the nitrification rate can be increased by adding nitrifying bacteria from commercial products. This will lead to an increase in nitrite, which while less toxic than NH3, is still toxic and other management plans should be applied in combination with other therapies.

The increase in ammonia could be caused by the fluctuation of pH levels, which is caused by low alkalinity. If the alkalinity is low, add about 12.5 ppm bicarbonate compounds such as CaO, CaCO​, CaMg(CO3)​ or NaHCO​ to the water every two to three days until the alkalinity reaches the optimum range of 120 to 200ppm.

In order to maintain shrimp health, probiotics need to be added to the water body. This will create a competitive environment for opportunistic pathogens. The commonly used probiotics in shrimp farming are Bacillus ​sp​, Lactobacillus ​sp, and Pseudomonas ​sp.

Feed is one of the main sources of ammonia in the water body. Consequently, when an ammonia problem appears, the amount of feed should be reduced by 30 to 40 percent. Besides, under high ammonia concentrations, shrimp appetite is reduced and feed reduction will prevent overfeeding.

Other than reduction, ammonia concentrations in culture water can be reduced by replacing the feed. Replacing the current feed with one containing lower nitrogen or protein content will reduce the nitrogen input to the water body.

A post-treatment pond is good practice, both to reduce environmental effluent loading and as a bio-controlled water exchange source. Post-treatment is primarily used to reduce the ammonia and pathogen concentrations released into the environment which helps to maintain local water quality and carrying capacity.

An alternate use of post-treatment ponds are to remediate the water and reduce ammonia concentrations, to then pump some of the water back into the grow out ponds. Post-treatment can be achieved in a number of ways from poly-cultured ponds with milkfish and seaweed to settling ponds, semi-mechanical processes and chemical treatment.

Use different strategies to manage ammonia

Ammonia is a significant limiting factor in shrimp production. Its build-up can reach toxic levels and affect shrimp health and water quality. This may lead to a reduction in farm productivity, economic losses and shrimp mortality.

However, ammonia build-up can be prevented by maintaining important water parameters – such as alkalinity, pH, salinity, and dissolved oxygen. Should an ammonia problem arise, there are countermeasures that could be implemented. This includes physical treatment, increasing nitrification rate and alkalinity, adding probiotics, maintaining a proper feeding regime and siphoning the pond.

Interest in tank-based shrimp production systems has been increasing in recent years in North America and Europe, while it's also slowly gaining traction

How to handle ammonia spikes when farming shrimp - Part 1