How to handle ammonia spikes when farming shrimp - Part 1 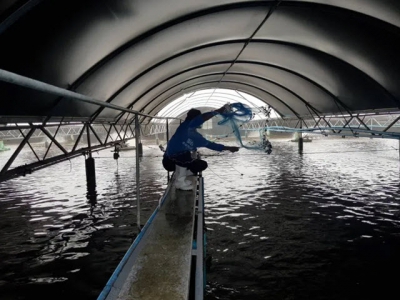 As part of a new series for The Fish Site, the experts at leading aquaculture financial tech company Alune share their insights and knowledge on how to manage water quality in shrimp aquaculture.

Excessive ammonia is one of the biggest challenges to overcome in shrimp aquaculture. As farmers seek to increase profits and intensify production, the problem of ammonia toxicity is more relevant than ever before, leading to high mortality and severe economic losses. This article looks at the impact of ammonia on Pacific white shrimp (Litopenaeus vannamei), and practical ways for farmers to prevent its excessive build-up on their farms.

Ammonia is nitrogenous waste produced from feed input and microbial decomposition of organic matter in water columns. Shrimp feed is usually high in nitrogen. In L vannamei culture, sometimes only 22 percent of the Nitrogen input is converted to harvested shrimp. 57 percent is discharged into the environment and 14 percent remains in the sediment. The microbial decomposition of excess feed, shrimps’ faecal solid, microbial populations and dead phytoplankton all contribute to the ammonia to nitrogen cycle in the culture water. 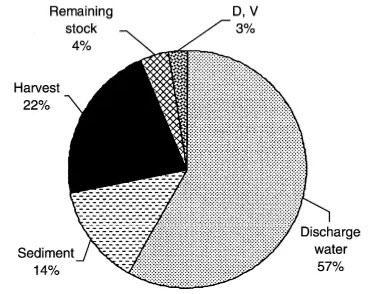 Ammonia is toxic to L vannamei because high concentrations can damage the gill, hepatopancreas and possibly the gut lining. This damage may affect various aspects of shrimp health – such as respiration, metabolism, immunity, osmotic regulation, nutrient absorption, excretion, moulting and growth. As a result of these physiological and immune impacts, high ammonia may allow pathogens to take hold, leading to mortality.

Besides its toxicity, TAN is concerning because of its influence on the carrying capacity of shrimp ponds. The carrying capacity is defined as the maximum biomass of cultured shrimp that the pond can support without breaching the limit of impacts to the cultured organisms and its surrounding environment.

A mathematical analysis undertaken by the team at Alune* on the sensitivity of TAN levels to several parameters – such as stocking density, water exchange rate, nitrification rate, growth rate and mortality rate – found that TAN is most sensitive to stocking density. As illustrated in the figure below, TAN levels tend to increase in higher stocking density. 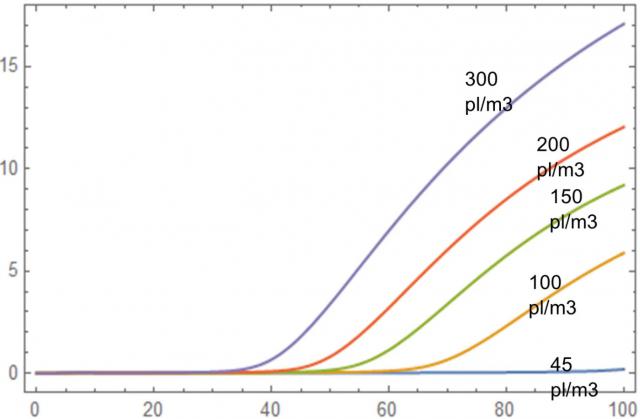 Model of TAN ppm sensitivities to levels over different stocking density. Assumes constant base rate of TAN assimilation by biofloc and phytoplankton per m3. Photo: Alune

Ponds with high stocking densities will feed more and so tend to have higher TAN concentrations over time, which will lead to lower carrying capacity.

As ammonia build-up increases, so too does the total oxygen demand that the organisms in the pond require. This may increase beyond what the pond infrastructure can replenish through photosynthesis or aeration. With elevated ammonia concentrations, the pond environment becomes stressful for the shrimp and leads to lost appetite and growth stagnation.

As illustrated in the chart below, this is when the critical standing crop (CSC) is reached, or a situation when growth slows from the maximum growth line. This would lead to the pond reaching its carrying capacity, or a situation where growth stops completely. High concentrations of TAN could lead ponds to reach their carrying capacity well before the shrimp attain marketable size, reducing revenues for the farm.

The toxicity of ammonia and the equilibrium of unionised to ionised ammonia is driven by factors including pH, temperature, salinity, alkalinity and dissolved oxygen. The ideal pH of water for shrimp aquaculture is between 7 to 8.

The rise of temperature would cause the fraction of unionised ammonia in TAN to increase. This often creates difficult management decisions as optimal growing conditions coincide with higher fractions of NH3 than would be achieved with lower pH and temperatures.

Dissolved oxygen and alkalinity are important as they improve the chemical and physiological process efficiency under stress conditions. They are also vital in supporting the removal of ammonia via the aerobic nitrification processes.

Nitrification is the conversion of ammonia to nitrite and nitrate. Nitrate is comparatively less toxic than ammonia and nitrite. Ammonia is converted into nitrite and then nitrate by nitrifying bacteria. Nitrosomonas bacteria convert ammonia to nitrite and Nitrobacter bacteria convert nitrite to nitrate. Oxygen is required for nitrification to take place and alkalinity of over 120 is recommended to support the growth of nitrifying bacteria. Poor levels of aeration in ponds can cause ammonia build-up to reach toxic levels.

A new diagnostic tool that can detect a range of aquatic pathogens, including DIV-1, between two and four weeks before clinical signs are apparent to shrimp

Interest in tank-based shrimp production systems has been increasing in recent years in North America and Europe, while it's also slowly gaining traction