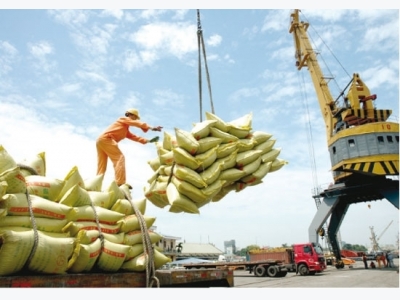 Preliminary data from the General Department of Vietnam Customs show that Vietnam exported 1.29 million tonnes of rice in the first quarter of this year, earning US$565.2 million. In March, 550,722 tonnes were exported bringing in US$251.4 million, up 36.8 percent in volume and 47.2 percent in value compared with February. The March results reflected improvements in rice exports and raised hopes of new opportunities to revitalize this key export sector.

China remains the top consumer of Vietnamese rice, accounting for more than 40 percent of the export volume and value. Vietnam exported 527,948 tonnes of rice to China in the first quarter of 2017, earning US$244.8 million, up 11.3 percent in volume and 14 percent in value compared with the same period last year. These were encouraging results in the context of numerous difficulties still facing rice exports to most other markets.

The Intimex Group Joint Stock Company has maintained strong growth in rice exports to China in recent years. It is one of the 22 companies allowed to export this staple to the world’s largest consumer by meeting the requirements of the protocol on plant quarantine for Vietnamese rice exports to China.

The Philippines is the second largest consumer of Vietnamese rice. In the first quarter of this year, Vietnam exported 235,491 tonnes of rice worth US$89.7 million to this market. Exports to the Philippines accounted for 18 percent of volume and 16 percent of value of Vietnamese rice exports, up 23.5 percent in volume and 10.3 percent in value compared with the same period last year. Meanwhile, exports to Singapore reached 60,946 tonnes in volume and US$31.8 million in value; Malaysia - 51,978 tonnes, US$21 million; the Ivory Coast - 46,640 tonnes, US$20.5 million; and Ghana - 38,534 tonnes, US$19.3 million.

According to the General Department of Vietnam Customs, while exports to most other markets decreased, exports to traditional markets, such as China, the Philippines and Singapore, remained on the rise in both volume and value. Together with Africa, these are the major importers of Vietnamese rice, helping maintain domestic prices for the winter-spring crop at rather high levels.

Overall, rice exports still face difficulties, including low prices, abundant supplies in the global rice market due to the sale of Thai rice stocks, and fierce competition with rice exports from Cambodia, Myanmar and India.

Despite these difficulties, economists believe free trade agreements (FTAs) will present Vietnamese rice exporters with new opportunities. Under the FTA between Vietnam and the Eurasian Economic Union (EAEU), which took effect in October 2016, 10,000 tonnes of Vietnamese rice will be exported free-of-tax to EAEU member countries. After that, Vietnamese rice exports to the EAEU will be taxed at 11.7 percent and subject to a value added tax rate of 10 percent, against the current tax rate of 40 percent. The growth of rice exports to Russia in the first quarter of this year was attributed to some extent to this FTA.

In mid-December 2016, the Ministry of Industry and Trade adjusted the import tariff quotas for 2016 and 2017 by applying an import tax rate of zero percent to rice of Cambodian origin. The adjustments were made based on the bilateral trade agreement between Vietnam and Cambodia and intended to help Vietnamese rice exporters fill export contracts signed with importers from other countries.

In the opinion of economists, the competitiveness of Vietnamese rice is not high because low and medium-grade products still account for more than 30 percent of rice exports. Vietnamese rice can hardly compete with products of the same categories exported by Thailand or Cambodia. Therefore, in 2017 and coming years, Vietnam needs to improve quality and build brands to promote exports to discerning markets, while at the same time diversifying export markets to reduce dependence on some markets.

In early January 2017, Minister of Industry and Trade Tran Tuan Anh signed a decision repealing regulations on rice export and trade and establishing a team to draft a decree amending and supplementing some conditions required of rice traders and exporters. The Ministry of Industry and Trade will consult other ministries, sectors, associations and businesses about the draft. The decree is expected to provide an important legal framework to ease rice export difficulties.

Coffee export markets were quiet this week as Indonesia is on holiday while premiums in Vietnam edged lower on weak demand, traders said on Thursday.

A move towards high-tech agriculture, prompted by Industry 4.0, can only be good news for an agricultural economy like Vietnam.