Enhancing the reputation and value of South Central region specialties 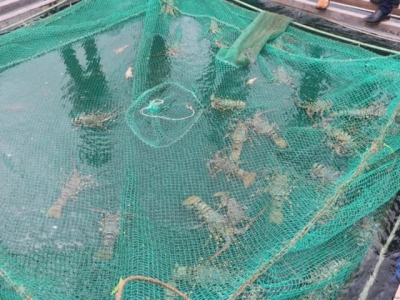 The granting of the geographical indication protection to Panulirus ornatus (lobster) will help the seafood improving its reputation, prestige, value and quality.

Lobster farming in Phu Yen started before 1990. Currently, the province has 2,200 households raising Panulirus ornatus with 35,000 cages, producing 150 tons per year, with a turnover of VND 3,000 billion each year. Phu Yen Panulirus ornatus has green color mixed with the green of leaves, the spines on the shell and head, and and chest are orange. The lobster’s two cheek spines are white, and between the dorsal shell of each abdominal segment there is a black horizontal strip. The legs of the lobster are black with pale yellow irregular spots.

Phu Yen Panulirus ornatus has an intact natural state, its shell is not soft, its head adheres to the body, its flesh is firm, elastic and firmly adheres to the shell.

“The geographical indication certificate “Phu Yen” for Phu Yen Panulirus ornatus help to affirm the value and quality of the seafood,” said Tran Le Hong, Deputy Director of the National Office of Intellectual Property. However, according to Hong, it is just only commercial indication, so in order to strongly develop products, Phu Yen province should invest comprehensively to perfect and improve the value chain of Panulirus ornatus from seed, feed formula, product quality, traceability, expansion of consumption markets, especially foreign markets. In addition, the province needs solutions and strategies to develop the Panulirus ornatus brand, making the product a spearhead in economic development.

“The market trend requires products with clear origin and protected trademarks. Panulirus ornatus is granted Phu Yen surely help the locality in building brands, certifying origin of goods, digitizing the farming industry and e-commerce in the lobster industry. Thereby, the value of lobster products is improved, the geographical indication market is developed as well as the farming is stable,” said Nguyen Tri Phuong, Deputy Director of Phu Yen Department of Agriculture and Rural Development.

Regarding the development orientation of lobsters in the near future, according to Mr. Phuong, Phu Yen province is removing obstacles in planning with the vision to 2022, when the provincial planning is approved, the contents of farming planning, including lobster farming will be integrated into it.

Based on the planning, the lobster sector in Phu Yen will rearrange cages, apply new material models to replace manual cages to reduce ocean plastic waste, adapt to climate change, and promote environmental protection. The province also has plan to move farming gradually from lagoons and bays to open sea as to reduce pollution. Along with that, the province will establish a club or association of lobster farming to build a value chain. When the farming condition is favorable, the province will establish a lobster farming cooperative for the purpose of further developing...

"Those are the jobs that we will do in the coming time to build a brand and develop sustainable lobster farming," Phuong said.

Khanh Hoa Babylonia areolate has large size, usually 10 - 12 g/head, as the province has favorable natural conditions and fishermen have a lot of experience.

The intestines of Khanh Hoa Babylonia areolate (edible meat) account for 42 - 50.7% of the total weight. After cooking, the volume of meat decreased insignificantly compared to the original weight (2 - 4%).

In 2000, Khanh Hoa became the first province in Vietnam that has the ability to produce artificial seed of Babylonia areolate. The province has over 500 hatcheries with a scale of 10 - 30 million seeds/year/farm. Currently, the total area of Babylonia areolate farming in Vietnam is about 700 hectares, of which Khanh Hoa accounts for over 75% (more than 500 hectares) with an annual output of 4,000 - 4,500 tons, estimated value at over VND 700 billion each year.

Every year, Khanh Hoa exports a large number of Babylonia areolate to China, Taiwan, Malaysia, Thailand and some European countries.

This geographical indication certificate is protected indefinitely nationwide from the date of signing on November 9, 2021.

Phu Yen and Khanh Hoa are coastal provinces in the South Central region. The coastlines are long, so they have great potential and advantages for marine farming.

In recent years, lobster farming in Phu Yen has brought great economic benefits to coastal fishermen, and also the province's economic development. As it has high economic value, the price of lobster is VND 1.2 - 2 million per kg in average; The rearing period is about 18 months to give the weight of 0.8 - 1.2 kg per head.

In Phu Yen province, lobsters farming will be developed with two forms, including cage farming in the sea and reared in ashore recirculation systems. The total farming area is 1,000 hectares, concentrated in Cu Mong lagoon (253 hectares), Xuan Dai Bay (747 hectares) with a total of 45,000 cages, equivalent to about 405,000 square metres.

The difficulties caused by Covid-19 have led to concerns about not meeting the plan to export seafood. But, in 2021, the seafood industry has unexpected results