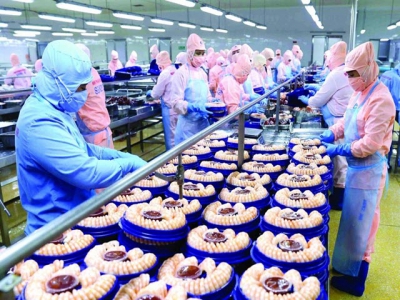 The difficulties caused by Covid-19 have led to concerns about not meeting the plan to export seafood. But, in 2021, the seafood industry has unexpected results when exporting value reached nearly US$ 9 billion.

Seafood exports continued to recover strongly in November so that the total export value in 11 months reached an unexpected figure of US$ 8.1 billion. Photo: TL.

US$ 8.89 billion for seafood exports

According to Mr. Truong Dinh Hoe, General Secretary of the Vietnam Association of Seafood Exporters and Producers (VASEP), the result of seafood export this year is estimated at US$ 8.89 billion which is surprising.

Mr. Hoe said that in the first 6 months of the year, seafood export was quite favorable when it reached more than US$ 4.1 billion, up 14.5% over the same period last year.

However, in July and August, the epidemic took place in a tense situation in Ho Chi Minh City. At that time, in the Mekong Delta, seafood processing factories were still operating normally, but the export speed of seafood had dropped sharply due to broken logistics and China's increased Covid-19 quarantine on imported frozen goods.

In August, seafood export value decreased by 36% over the same period in 2020. In September, seafood export continued to decline sharply by 23% over the same period. The seafood industry cannot avoid the fear that the whole year's export will reach the target of US$ 8.5 billion or not? Even, VASEP once determined that the whole year's export can only reach about US$ 8.4 billion.

But from October, when seafood enterprises in the South began to restore production, seafood exports quickly recovered when reaching US$ 918 million, up 47% compared to September and almost equivalent to US$ 918 million in October 2020.

Seafood exports continued to recover strongly in November so that the total export value in 11 months reached an unexpected figure of US$ 8.1 billion.

According to Mr. Hoe, Resolution 128/NQ-CP of the Government with its flexible anti-epidemic policy has brought a new breath of life, helping seafood production and export to quickly recover.

In addition, the timely support of Working Group 970 of the Ministry of Agriculture and Rural Development has helped many factories maintain the stage of purchasing and transporting aquatic materials.

The Directorate of Fisheries also regularly gives close instructions on maintaining seafood production and ensuring the supply and circulation of raw seafood for factories during the social distancing period in the South.

Many seafood enterprises have also made great efforts, flexibly, finding all measures to reserve raw materials to ensure the maintenance of finished product processing, overcoming huge difficulties in lack of ships, lack of containers, and higher freight...

Mr. Hoe affirmed that seafood businesses have shown bravery in the most difficult times. When exports encountered a stalemate, they did not calmly assess the situation and timely adjust production and business plans. As a result, businesses have made good use of the opportunity to accelerate exports in the year's last months.

Shrimp is still the critical product

Shrimp exports (a key product of Vietnam's seafood) in 2021 also have very proud results. In the first 7 months of the year, shrimp exports were quite favorable when reaching more than US$ 2.2 billion, up 14% over the same period in 2020.

In August, due to the impact of social distancing, shrimp exports plummeted by 28% over the same period in 2020 and reached only US$ 282.7 million. In September, shrimp exports continued to decrease by 20% to reach US$ 308.5 million.

As a result, Vietnam is in the Top 5 largest shrimp exporting countries in the world, ranked 4th, after India, Ecuador, Indonesia, and ahead of Thailand.

According to VASEP, the demand for US shrimp imports from Vietnam has been quite stable since the Covid-19 pandemic broke out in the world. During the 4th outbreak in Vietnam, shrimp exports to the US only decreased in August and quickly recovered in September.

Shrimp exports to the EU also grew very impressively, especially in November with US$ 66.5 million, up 86.4% compared to November 2020. Generally, in the first 11 months of this year, shrimp exports to the EU reached US$ 548 million, up 16% and accounting for 15.4% of the total shrimp export value. In which, the three largest single markets of Vietnamese shrimp in the EU are the Netherlands, Germany, and Belgium, accounting for 69% of Vietnam's shrimp imports into the EU.

According to Mr. Hoe, the important factor that helps shrimp exports remain successful in 2021 is that Vietnam has taken advantage of market opportunities when India and Indonesia were severely affected by the Covid-19 disease. Importers believe in the supply ability of Vietnamese shrimp enterprises, so they have transferred many orders to Vietnam.

The Directorate of Fisheries forecasts a shortage of raw materials for export basa processing in the first quarter of 2022 due to the impact of COVID-19.