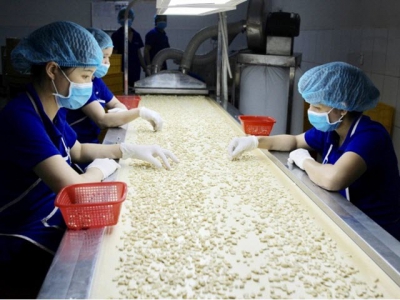 The EU is currently the second largest market for Vietnam's cashew nuts and exports to this region in 2022 are expected to reach US$ 900 million.

Therefore, the growth of cashew nut exports to the EU contributed significantly to the overall growth of the cashew industry.

This positive growth is due to the EU's high demand for cashew nuts in the last months of the year to serve the demand in the Christmas and the new year holidays.

Germany and the Netherlands are currently important trading hubs for cashews in the EU. These two markets both import for domestic consumption and re-export to other markets in the bloc.

Vietnam's cashew industry has also exploited well other EU member markets, such as France, Spain and Poland. These are all good markets for cashew nuts.

In the last year, Vietnam's cashew industry has been quite successful when exploiting the gateway market in the EU such as the Netherlands and Germany, and also exploiting other important consumption markets or markets with great potential in EU, such as Finland, Poland, Belgium, Spain, Romania, Portugal...

With the above results, it can be said that Vietnam's cashew nut exports to the EU have had a quite successful year in the context of the complicated developments of the Covid-19 pandemic, difficulties in production, customs clearance and fees increase.

This assessment is based on factors, such as supply, demand, and export prices tend to recover from the end of 2021.

With the EVFTA coming into effect, the EU's import tax rate on cashew nuts from Vietnam at 0% is an advantage to help Vietnam's cashew industry increase exports to the EU and expand its market share.

Ecoagriculture - An option for Vietnam’s agriculture

Ecoagriculture can be considered the only option that helps us achieve the goals of adaptation and risk mitigation at the same time - Dr. Pham Van Hoi.

According to the Vietnam Trade Office in Australia, 200 tons of frozen jackfruit type 1, equivalent to 1,000 tons of raw jackfruit, have been registered