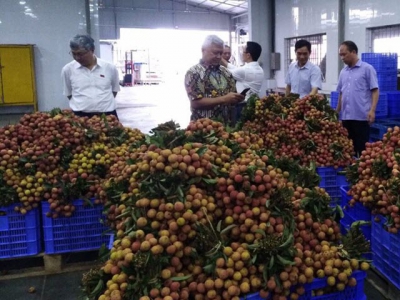 The People’s Committee in Bac Giang province has issued Plan to organize various activities of meeting, forum, festival to introduce the tourism products and promote the consumption of lychee, key and signature farm produce in the province in 2021.

Accordingly, the provincial People’s Committee (PPC) on June 8, 2021 will hold Promotion Teleconference for Lychee Consumption at the provincial Conventional Center in February 3 Square in Bac Giang city to various domestic and foreign bridge points which is also broadcast live on Bac Giang Radio and Television, some local broadcasting stations, fanpages and social networks.

The major bridge point is set up at the provincial Conventional Center with about 500 representatives from Embassy and Counsellor of the Economic and Commercial Office of China, Japan, Australia, Thailand, Singapore in Vietnam; from Japan External Trade Organization (Jetro); Australian Commercial and Investment Organization in Vietnam; Governmental Office; Ministries of Agriculture and Rural Development, Industry and Trade; provincial leaders; several groups, enterprises, distributors, commercial centers, supermarkets...

Besides, the event is broadcast live to domestic bridge points at the People’s Committee in the provinces of Lao Cai, Lang Son and 20 points at VNPT centers of other provinces and cities across the nation.

It also creates chance for national and international business and traders to seek new partners, enhance coordination among the provincial competent agencies with central bodies, provincies, cities and countries so as to facilitate the consumption of lychee and other farm produce in the province.

The teleconference will be followed by the departing ceremony for the lychee cargo to domestic and foreign markets at February 3 Square (Bac Giang city).

Previously on May 26, 2021, the People’s Committee in Tan Yen district will organize the same ceremony to bring early ripen lychee in the district to sell at Japan market.

The demand for Halal food in the world is increasing, not only among the Islamic community but also non-Muslims. The current global trade in Halal food

After 5 years of implementation, the project "Sustainable agriculture transformation in Vietnam" (VnSAT) of Long An province in the period of 2016-2020

An Australian firm has sought a patent for Vietnamese rice varieties ST25 and ST24.