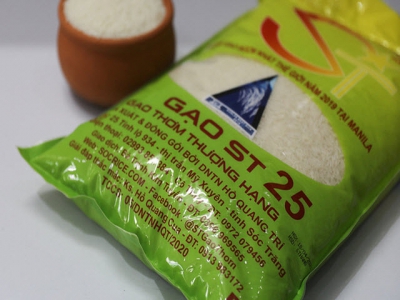 An Australian firm has sought a patent for Vietnamese rice varieties ST25 and ST24.

A bag of ST25 rice sold at a store in Ho Chi Minh City. Photo by VnExpress/Quynh Tran.

It is the sixth company internationally – the other five are in the U.S. – to seek to appropriate ST25.

Both were developed in Vietnam by farmer-scientist Ho Quang Cua, with ST25 going on to win the first prize in the 2019 World’s Best Rice Contest held in the Philippines and ST24 the second prize in the 2017 contest in Macau.

Ngan Tran, director of Maygust Trademark Attorneys in the Australian capital Canberra, said it takes three to four months to carry out checks for a patent registration.

If an application meets all the requirements, the IP agency would issue a notice accepting the trademark and disclose the information enabling anyone with an objection to file within two months, she explained.

If there is no objection, the patent would be granted, she said.

Of the five applications for ST25 submitted to the United States Patent and Trademark Office (USPTO), only the one by I&T Enterprise Inc. has crossed the first stage.

The Vietnam Trade Office in the U.S. is helping a Vietnamese company fight I&T.

The USPTO is set to publish the application by I&T on May 4, and Cua and his son’s company needs to file an objection by June 4.

Several ministries are assisting Cua’s company, which has also hired a law firm.

Vietnam’s coffee exports in the first four months of the year likely down 17.6% from a year earlier to 563,000 tonnes, while rice exports likely down 10.8%

The demand for Halal food in the world is increasing, not only among the Islamic community but also non-Muslims. The current global trade in Halal food

After 5 years of implementation, the project "Sustainable agriculture transformation in Vietnam" (VnSAT) of Long An province in the period of 2016-2020