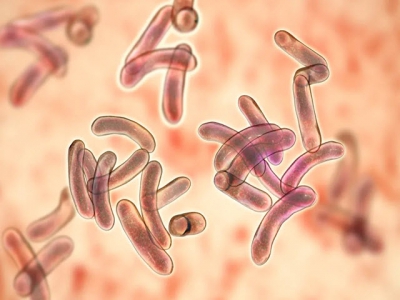 Vibrios are some of the most unwelcome bacteria in the global shrimp farming sector, causing diseases including EMS and costing the sector billions as year. However, as we explain in this article, there are a huge number of ways for farmers to reduce the risks of vibrio-related diseases.

Vibriosis is one of the most severe bacterial diseases in shrimp aquaculture, and is caused by the infection of pathogenic and/or opportunistic Vibrio bacteria. It can lead to mortality of up to 100 percent and is estimated to cause the shrimp sector US$ 3 billion in global losses a year. One of the most recent cases of vibrio-related diseases is early mortality syndrome (EMS), which is also known as acute hepatopancreatic necrosis disease (AHPND) and has put a huge dent in the profits from Asian shrimp production in the last decade.

Vibrios are a genus of bacteria that exists in aquatic environments and is prevalent in shrimp grow-out ponds. Many of the Vibrio species are non-pathogenic and can be found in healthy shrimp. However, Vibrios may turn from being commensal to pathogenic and cause disease outbreak under certain environmental conditions. Important environmental parameters include water temperature, dissolved oxygen, ammonia, organic matter and heavy metal content, but it is hard to determine due to its dynamic, complex, and highly variable nature. Some species and strains are pathogenic and its mere presence may lead to mass mortality.

Diseases caused by vibrio-related infections may occur more frequently in hatcheries, due to the relatively underdeveloped immune systems of juvenile shrimp. However, disease cases in shrimp grow-out ponds are also possible. Here are some of the clinical sign of vibriosis infection, namely:

In L. vannamei farming Vibrio bacteria are associated with some of the deadliest diseases. Vibrio harveyi is associated with luminous bacterial disease as the major pathogen which attacks larval shrimp and causes massive mortality. V. vulnificus, V. fluvialis, V. parahaemolyticus, V. alginolyticus, V. damselae (Photobacterium damselae), V. mimicus and V. cholera are associated with the white faeces disease (WFD), which has been wreaking havoc in many major shrimp producing countries. V. parahaemolyticus is also the leading cause of EMS/AHPND which we have covered in more detail before here.

Due to the risk and severity of disease, preventive measures relating to this specific threat are needed. Here are some of the key actions that farmers may apply.

As Vibrios live ubiquitously in pond water, monitoring vibrio concentrations and maintaining them below a certain threshold can be one of the ways to prevent Vibrio infection. The maximum threshold varies, depending on farm history, conditions and environmental circumstances. Having said that, here are some of the most common maximum thresholds that we would recommend:

Selecting the shrimp post-larvae (PL) genetics and hatcheries should be of high priority. PL from hatcheries can be a common source of pathogen infections on the farm. To prevent this, use specific pathogen-free (SPF) PL from certified hatcheries to ensure safety and quality.

In the case of Vibrio-related diseases, it is important to ensure that the farm is protected from pathogen entry via various vectors and always maintained clean. Here are some biosecurity actions that you can take:

It is also important to sterilise culture water with chlorine before the cycle starts, as it helps lower bacterial load in the water (see Table 2 below), and to combine this with regular pond bottom cleaning and probiotics application.

Probiotic bacteria also help maintain good water quality through direct uptake or decomposition of the organic matter in the water. Some of the strains usually used for this purpose include Nitrosomonas sp., Nitrobacter sp.,Nitrosococcus sp., Bacillus sp.,Aerobacter sp.,and Pseudomonas sp. 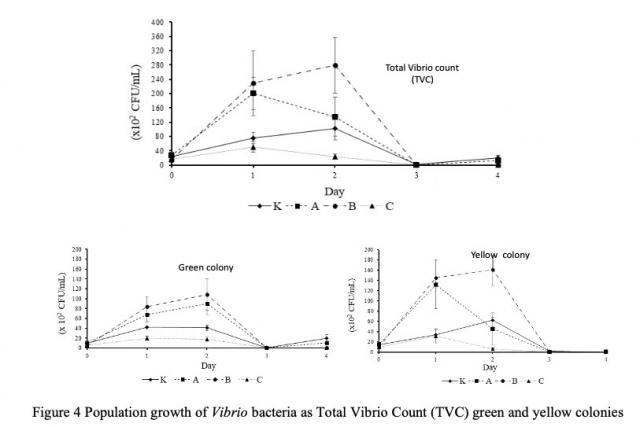 BFT is a zero or low water exchange system that stimulates microbial growth through the addition of carbon and a high amount of aeration in the water. The microbial communities will, in turn, coagulate into flocs, which feed on organic matter and compete with pathogens, resulting in better water quality and reduced disease risks. Studies show that BFT successfully reduced vibrio concentration as well as vibrio-related infections. It is also proven to be effective against AHPND. However, BFT is not without its downsides, which include its difficulty to maintain in open systems, its high electricity demand and the need of trained technicians to run and maintain the system.

GWT was initially developed by shrimp farmers in the Philippines. It works by utilising fish rearing water in shrimp grow-out ponds. Various species of fish might be used for this, but a study found that tilapia is the best candidate. A GWT system with tilapia biomass of >300 g/m3 per 80 g/m3 of shrimp biomass is reported by a study to contain lower Vibrio concentrations. A study also reported that the system is effective in combating EMS/AHPND and provides enhanced shrimp health alongside a higher survival rate. These benefits may be attributed to the antagonistic effect of mucous and other metabolites that are inherent in tilapia against Vibrio spp.

GWT is also characterised by the high amounts of microalgae, such as Chlorella and Nannochloropsis, which are beneficial due to their ability to produce antibacterial substances and compounds acting as quorum sensing (QS) quenchers to inhibit Vibrio growth and attenuate the virulence. The compounds produced by microalgae in GWT systems can interfere with bacterial quorum sensing, which results in growth inhibition and virulence attenuation, as mentioned earlier. The risks of using GWT are that – if not properly managed – it might result in oxygen depletion, unstable pH value and mass mortality. This system also loses its efficacy when the shrimp biomass is higher. It is also always more difficult to maintain two species with very different needs.

We hope that these key actions may guide you in preparing for a successful cycle. Some of these have indeed been mentioned in previous articles, but we believe that they are some of the more powerful basics that bear repeating. Stay tuned for more tips on shrimp farming from us.

How to manage water effluent from shrimp farms

Effluent from shrimp ponds can have a significant impact on the natural environment and on neighbouring shrimp farms, but there are a number of ways to reduce