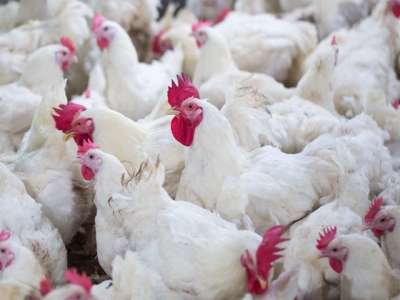 Researchers from the University of Georgia in the US and the Federal University of Parana in Brazil explored the use of β-mannanase in the diets of broilers challenged with the coccidiosis vaccine. The group published details of its work in the journal Livestock Science​​​.

“The objective of the present study was to evaluate the diversity and composition of the ileal and cecal microbiota of broiler chickens supplemented with β-mannanase and challenged or not with a coccidiosis vaccine,”​ the researchers said.

In the feeding and disease challenge study, the researchers found that the Chao index fell – the index tracks the minimal number of operational taxonomic units (OTU) present in a DNA sample – but that supplementation with β-mannanase “reverted”​ the effect for the microbiota in both the cecum and small intestine.

Bacteria strain in the cecum changed in birds receiving the β-mannanase feed additive compared to non-supplemented birds and the additive was found to help modulate the microbiota by increasing beneficial strains, they said.

“The results presented herein show that β-mannanase supplementation is beneficial in attenuating the negative effects of coccidiosis on the intestinal microbiota of broiler chickens and maybe a useful strategy in non-antibiotic production systems."​

“The bacteria present within the intestine depend upon the dietary components, probably those resistant to the digestive process or not well absorbed, to obtain energy for their growth,” ​they said. “As different bacterial populations coexist in the gut and have different preferences for substrate, dietary modifications will change the diversity, composition, and distribution of microorganisms within the intestine.”​

A “stable”​ microbial population may reduce the growth of pathogens and improve birds’ immune defense, they said.

However, factors including altering the ingredients used in bird diets or disease challenges can sift the composition and diversity of the intestinal microbiota, they said. But, modulating intestinal microbiota following a “dysbiosis event”​ linked to an enteric disease could support the bird in overcoming the disruption to nutrient use stemming from the infection.

“For instance, coccidiosis, one of the most important parasitic diseases of poultry, caused by the protozoan of the genus Eimeria, causes damage to the intestinal epithelium that impairs the proper absorption of nutrients, and increases the leakage of plasma proteins into the lumen, which may serve as a substrate for the proliferation of Clostridium perfringens,” ​the researchers said. “Coccidiosis has also been shown to affect the diversity and composition of the microbial community.”​

Feed additives that could positively influence intestinal microbiota may help a bird manage an infection, they said.

Increasing regulations and concerns regarding the use of antibiotics in livestock production support interest in finding feed additives to support gut health while addressing enteric diseases, the researchers said.

Adding enzymes to broiler chicken diets can help digest plant materials in feed that birds could not otherwise use – like non-starch polysaccharides (NSP), they said.

“The mechanisms behind the efficacy of NSP enzymes as growth promoters is not completely elucidated, but it is believed to be due to the generation of prebiotic oligosaccharides that stimulate the proliferation of short-chain fatty acids (SCFA) producing-bacteria, and reduced susceptibility to pathogenic microorganisms,”​ they added.

Exogenous enzymes can boost digestion of feed components like protein and starch to provide more nutrients for the bird.

“The enzyme β-mannanase is an endohydrolyase that breaks β-mannans, specifically chains of galactomannan, galactoglucomannan, and mannans (Jackson et al., 2004), which reduces the intestinal viscosity, promoting improved nutrient digestibility,”​ they said. Use of the feed additive may support better growth performance and improved digestibility as many of the carbohydrates in soybean meal are NSP.

“There have been some studies looking at the effects of β-mannanase on the performance, carcass yield, immune system and intestinal health in broiler chickens,”​ the researchers said. “However, there is no report on the effect of this enzyme on the diversity and composition of the intestinal microbiota.”​

The researchers hypothesized that adding β-mannanase would reduce the effects from coccidiosis on broiler chicken’s intestinal microbiota by expanding the “diversity and beneficial groups of bacteria.”​

During the feeding trial, 320 day-old broiler chickens were weighed and provided one of four diets for a 42 day period, the researchers said.

Birds faced a disease challenge on day 14 from coccidiosis presented in a live-attenuated vaccine, they said. A selection of chickens was collected on days 21 and 42 so the gastrointestinal tract (GIT) could be gathered for analysis.

The contents of the cecum and small intestine were checked for bacterial DNA, which was amplified to assess gene presence and allow for “taxonomic classification,”​ they said. Samples were examined for the alpha diversity indices – the number of operational taxonomic units (OTU) – Chao index – minimal number of OTU found in a sample – and the Shannon index – richness and evenness.

On day 21 there was an influence found from the disease challenge, the researchers said. Chickens that did not receive the supplemental β-mannanase saw the number of OTU and the Chao index fall for cecal and small intestinal microbiota compared to non-challenge birds.

“The supplementation of β-mannanase resulted in a higher number of OTU and Chao index in both cecal and small intestinal microbiota when compared to the control treatment, regardless of the challenge,” ​they said.

“In the present study the challenge with a high dose of a coccidiosis vaccine reduced the alpha diversity indices of the ileal digesta and cecal content microbiota, mainly on d21, i. e., 7d after the challenge,” ​they said. “On the other hand, enzyme supplementation increased these indices regardless of the presence of challenge, indicating that β-mannanase was able to mitigate the negative effects of enteric challenges on the intestinal microbial diversity.”​

The use of the feed additive boosted the diversity of microbiota in the small intestine and in cecal microbiota and increased the number OTU, the researchers said. Adding, “β-mannanase modulated the microbiota, leading to an increase of benefic groups, such as Lactobacillus, Ruminococcaceae, and Akkermansia, and reduction of Bacteroides that is related to poor feed efficiency in broiler chickens.”​

“The challenge with Eimeria increased the frequency of Bacteroidetes (P ≤ 0.05) at d21 in unsupplemented broiler chickens, but not when they were supplemented with β-mannanase,”​ they said. By the end of the trial, in the cecum, bacteria of the phylum Verrucomicrobia​ saw a significant increase in bird that received the supplemented feed or did not face the disease challenge.

Birds receiving the feed supplement demonstrated increased levels of bacteria of the genera Ruminococcaceae​ in cecal microbiota, lower levels of Bacteroides ​and Faecalibacterium ​and more Akkermansia​ by the end of the trial, they said. In the small intestine, supplemented birds showed more Lactobacillus.

“Supplementation of β-mannanase decreased S. pasteurians and R. ilealis and increased Lactobacillus reuteri in the small intestinal digesta microbiota,” ​the researchers said. “In the cecal content microbiota, the enzyme increased Anaerobacterium chartisolvense and Alistipes onderdonkii, and decreased I. butyriciproducens. However, S. pasteurians decreased with the supplementation of the enzyme, and increased with the challenge.”​

Scientists to examine how stress experiences affect development of brain processes linked to appetite in birds.

Customized probiotics for turkeys may be effective antibiotic alternative

Next steps will be to test customized probiotics on poultry farms.