Exports of mango, guava and mangosteen to Russia soar 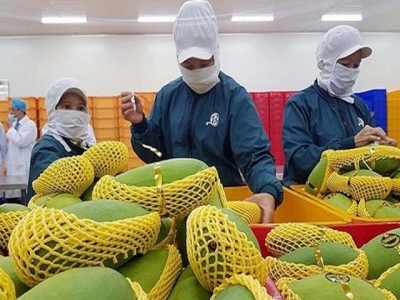 HÀ NỘI — Việt Nam was the fourth largest supplier of mango, guava and mangosteen to Russia in January this year, reaching 226 tonnes, worth US$807,000, up 114 per cent in volume and 62.7 per cent in value compared to January last year.

The proportion of imports from Việt Nam accounted for 6.1 per cent of Russian total import volume.

Statistics of the International Trade Center (ITC) showed that imports of mango, guava and mangosteen of the Russian market grew sharply in the 2016 - 2020 period, increasing 68.4 per cent per year on average.

Russia imported the most mango, guava and mangosteen from Peru in January this year. The proportion of imports from this market accounted for 69.4 per cent of the total import volume.

The Russian market still had plenty of room for Vietnamese exporters to exploit as Russian fruit and vegetable production was still limited, and due to climatic conditions, the country could not produce tropical fruit and vegetables, said ITC.

Meanwhile, the demand for vegetables and fruits among Russian people is increasing. Therefore, Russia has to import up to two thirds of its annual fruit and vegetable consumption.

According to statistics from the General Department of Customs, the export of vegetables and fruits reached $403.71 million in March this year, up 12.9 per cent compared to the same period last year.

Export of vegetables and fruits increased continuously in the past three months, after decreasing since September last year.

Exports of vegetables and fruits reached $966.72 million from the beginning of the year to the end of March, up 8.7 per cent year-on-year.

Việt Nam's fruit and vegetable exports to Australia, Taiwan, Russia, and Malaysia also grew strongly in the first three months of this year; while exports to markets such as Thailand, South Korea, Japan, the Netherlands dropped.

Di An city to improve the quality of urban agriculture

With the aim of make more efficient use of land resources, improve production values and incomes of farmers

As a key pillar of the national economy, Vietnam’s agri-food sector remained resilient during the COVID-19 pandemic