Exploring the use of probiotics in shrimp farms 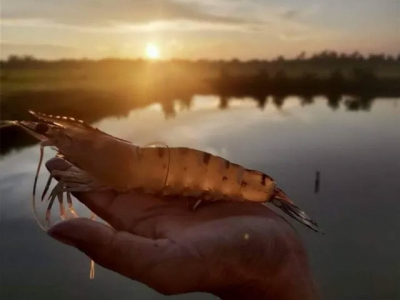 The increasingly sophisticated administration of probiotics is having a major impact on the sustainability of shrimp aquaculture, and there are further advances expected, through the use of synbiotics, biofloc and semi-floc systems.

As shrimp production intensifies and disease risks become prominent, shrimp health has become more important than ever, as it can make or break the whole production cycle. The old way of ensuring optimum shrimp health was through the use of antibiotics, but people are now aware that they create antimicrobial resistance and have negative environmental impacts.

From the turn of the century, a new approach in aquaculture emerged – probiotics – with the promise of more safety and sustainability. Pioneered by David Moriarty, an Australian scientist, the approach, which has been widely used for humans and other animals, has slowly but surely gained its place in shrimp aquaculture. Here, we will explore various niches of probiotic administration in Pacific white shrimp (Litopenaeus vannamei) and the subsequent benefits.

Probiotics are, in general terms, live microbial feed supplements which provide beneficial effects for the intestinal balance of the host animal. However, in aquaculture they can be defined as live microbial adjuncts which are beneficial for the host animal because of their ability to modify the host-associated or ambient microbial community, leading to more efficient use of feed and enhanced nutritional value, improved immune response and better water quality.

From these definitions, we can see that aquaculture probiotics are different, because their modes of action are not limited to the microbial balance of the host animal’s intestines, but also cover the microbial community in the external environment. The health of aquatic organisms is heavily influenced by the water they live in. Thousands of microorganisms, including pathogens, live in the culture water and these can deteriorate water quality and cause disease.

The use of probiotics

Probiotics for aquaculture are usually divided into at least two dominant types – water probiotics and gut probiotics. When using probiotics, it is important to note that there are certain brands of commercial probiotics which require the farmers to ferment the product before use in order to activate the bacteria, otherwise they will not work. Other brands may not require fermentation at all and are ready to use straight from the package.

It is also worth taking into account that a reliable source of probiotics is key. In many cases, the brand only mentions the bacterial composition of their probiotic products without describing the number of bacteria contained in the package. The number is important for administering the right dosage and without it the application is less efficient. The other thing to note is that the bacteria composition described in the packaging may not match the actual product. We would recommend testing the products before use to ensure that they are reliable.

As for the dosage, every brand usually has its own guidelines. It is better to stick with the provided guide from the manufacturer. Generally, the dosage should change throughout the cycle, with heavy applications at the beginning and during stressful, complex situations, such as when the vibrio load increases or water quality decreases.

Water probiotics, as the name suggests, are administered directly to the shrimp pond water. They work in two ways: competitive exclusion and inhibition of pathogenic bacteria, as well as improvement of water quality. The strains of bacteria used for water probiotics include Bacillus acidophilus, B. subtilis, B. licheniformis, Nitrobacter spp., Aerobacter and Saccharomyces cerevisiae.

In terms of pathogen exclusion, probiotic bacteria can multiply and proliferate in the water, making it difficult for the pathogenic bacteria to compete for resources, which reduces the levels of pathogens in the water. Probiotic bacteria also have the ability to inhibit opportunistic pathogens, preventing them from infecting the shrimp. By means of exclusion and inhibition, water probiotics can reduce the chances of disease, as well as limit the duration of existing disease outbreaks.

Not unrelated to this, the effect caused by pathogens in water can also be minimised by improving water quality. Bacteria strains such as Bacillus, Pseudomonas, Acinetobacter, Cellulomonas, Rhodopseudomonas, Nitrosomonas, and Nitrobacter, used as water probiotics, usually act as bioremediators. These have the ability to enhance the decomposition process of various organic substances in the water column and pond bottom that could be toxic to the shrimp, improving the water quality as the organic wastes are properly decomposed.

With fewer pathogens and better water quality, shrimp health can be maintained at high levels and production can be optimised. Not only that, with improved water quality, farm effluent water is less toxic, reducing the farm’s environmental impact on the surrounding body of water.

One of the benefits is enhanced immune response. The defence mechanisms of shrimp are less developed than other aquatic organisms, and they rely on a non-specific immune system. Probiotics support this immune system by enhancing the immune response to pathogen assault. Not only that, probiotics can also prevent pathogen proliferation in the gut, as well as inhibiting pathogenic actions, providing better protection against possible infections and diseases.

Probiotics also have the ability to modify the metabolism of microbiota in the shrimp gut to produce short-chain fatty acids for improved digestion. This leads to increased appetite, better growth and improved FCRs – which in turn reduces the amount of waste from uneaten feed and therefore improves water quality. Overall, feed probiotics provide farmers with better growth, healthier shrimp and less water pollution.

Biofloc technology is an emerging system in shrimp aquaculture which offers a more robust means of disease management and a reduced environmental impact by utilising beneficial bacteria for waste recycling and implementing low or zero water exchange. Biofloc technology works by limiting or eliminating water exchange, adding external carbon sources – such as molasses, sugar cane or wheat bran – to the pond and providing high oxygenation.

These three main procedures create an environment with a balanced carbon-to-nitrogen (C/N) ratio that stimulates the growth of microbial communities in the water, especially heterotrophic bacteria. The desired C/N ratio varies between ponds, but usually it is 1:5. Under the right conditions, microorganisms, such as bacteria, algae and phytoplankton, and organic matter – like feed, faeces and old shells – will join together into “flocs”.

These flocs can help improve water quality by converting ammonia and other organic wastes into bacterial biomass. They also recycle wastes into nutritious food for the shrimp by transforming additional carbon sources into microbial protein. In this way, the proliferation of pathogens can be prevented and shrimp growth enhanced. The low or zero water exchange in these systems can also further reduce the spread of pathogens within the farm and water pollution outside it.

In the biofloc system, probiotics are usually used as the bacteria starter. In common practice, probiotics are not administered in the biofloc ponds since the bacteria in them already have a “natural probiotic” effect. However, a recent study shows that the addition of probiotics to the biofloc can further enhance the system, by improving growth, digestion, metabolism, disease-resistance and water quality, as well as reducing the vibrio load. Although still in an early experimental stage, the combination of probiotics and biofloc shows great potential for increasing the sustainability of shrimp farming.

Biofloc technology requires a high degree of technical knowledge to make sure all the inner workings of the system operate smoothly. A simple problem, such as a power cut, would make the pond environment very toxic, because aeration stops, significantly reducing the dissolved oxygen (DO) level. This leads to the emergence of a hybrid system called semi-floc which combines traditional and biofloc approaches for a more affordable, doable and environmentally sustainable aquaculture system.

Semi-floc requires regular siphoning to take out excess nitrogen, as opposed to relying on microbial decomposition by heterotrophic bacteria.

Both biofloc and semi-floc have the same purpose – to manipulate the microbial interaction in the pond to create flocs. However, if biofloc relies mostly on heterotrophic bacteria, semi-floc combines a balance of autotrophic and heterotrophic organisms. Because of this, semi-floc requires regular siphoning to take out excess nitrogen, as opposed to relying on microbial decomposition by heterotrophic bacteria. Water exchange is also permissible, if required, but should be kept to a minimum.

In a semi-floc system, the bio-microfloc formation is driven by additional chemicals and microbial products or probiotics. In contrast with biofloc technology, semi-floc needs probiotic administration during culture in order to maintain a good FCR. The coating of Bacillus probiotics can help improve feed digestibility and absorption.

Innovations in modern shrimp aquaculture continue to push forward. As probiotics have become mainstream, a new holistic approach has emerged, combining probiotics with the traditional technique of prebiotics. Together they are called synbiotics.

While probiotics are live organisms beneficial for shrimp intestinal microbiota as well as the water, prebiotics are non-digestible feed additives which provide beneficial effects by stimulating the growth and activity of beneficial bacteria in the shrimp gut. Prebiotics have been applied by shrimp farmers for a long time. Now, the advocates of synbiotics claim their approach as a low-cost technique with more productivity and efficiency.

Applying synbiotics in farms is quite simple. Prebiotics, usually in the form of rice bran, and probiotics are fermented in sterile freshwater, together with enzymes and buffers. After fermentation is done, the substance can be administered directly into the pond or mixed with the feed. It is shown that the application of synbiotics can stimulate growth, lower the FCR, and reduce pH fluctuations.

With lower FCRs, synbiotic systems may be easier to manage since the organic loads from uneaten feed are low and high rates of water exchange are less necessary, thus reducing water pollution. The simplicity and overall performance make synbiotics an interesting approach to be developed even further, to ensure more sustainable aquaculture.

The perennial problem of shrimp disease has driven the shrimp aquaculture industry to find viable solutions which are safe and sustainable – both economically and environmentally. Probiotics in various forms have been giving farmers substantial help in managing diseases, decreasing environmental impact and enhancing production. Nevertheless, they are no silver bullet and many of the details are still largely unknown. As more research and development are currently underway, we can only expect probiotics to become better and more efficient.

The portal of entry of one of shrimp aquaculture’s most deadly and costly diseases has finally been discovered, thanks to a research breakthrough

How does biofloc production impact the shrimp microbiome?

Biofloc technology is a sustainable way to scale-up shrimp aquaculture, but how do the microbial flocs impact the microbiomes, overall health of farmed shrimp?