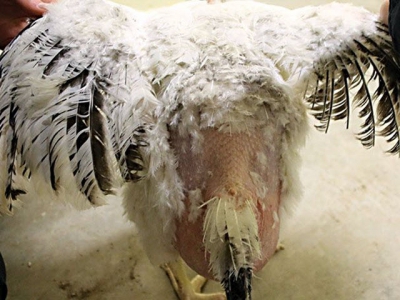 Insoluble fiber source is essential for poultry welfare and performance

Poultry have an inherent need for fiber to maintain a healthy digestive system. Soluble fibers can be used as an energy source by poultry; however, they also reduce the digestibility of nutrients, such as protein, starch and fat. They do this by increasing digesta viscosity, by binding them in the case of pectin, or creating a barrier effect. This in turn reduces the rate of intestinal passage and potentially causes wet litter. Meanwhile, insoluble fibers, the structural fibers found in plant material, cannot be used as an energy source by monogastric species.

Most soluble fibers are fermentable, meaning gut bacteria can use them as a food source, which has a positive influence on the balance of the bird’s gut microflora. It is often thought that all insoluble fibers are also non-fermentable. In fact, gut bacteria can also use certain structural fibers. Often they are more slowly fermented and have an effect of specific types of bacteria.

The focus of this article is on insoluble fibers, specifically lignocellulose, and poultry’s requirement for them to optimize health and productivity.

The importance of fiber

Fiber plays a considerable role in gizzard development, due to its physical stimulation of the organ. It also helps to regulate digestive passage rate and is known to improve the development of the gastrointestinal tract (GIT).

When lignocellulose is added to the diets of broilers, improvements in the length and density of intestinal villi were indicative of an increased capacity for nutrient absorption. The gizzard weight in relation to carcass weight was increased by 11 percent and similarly intestine:carcass was 7 percent higher in birds fed lignocellulose.

In order to increase the level of fiber in the diet, the specification could be changed to increase the use of high-fiber raw materials. Such ingredients include sunflower seed meal, oat hulls and wheat bran.

This strategy relies on ingredients with variable cost and availability to supply the precise levels needed. They also take up a significant amount of room in the diet and can affect digestibility – for young birds, this is particularly evident.

The fiber level of this kind of raw material can vary significantly, therefore regular testing and updating of matrix levels is required. There can also be a risk of microbial and mycotoxin contamination.

Most of the fiber additives on the market are based on lignocellulose. These insoluble fibers come from wood, which has been processed into a form suitable for feed addition.

“We use the structural wood from the trunk of the tree and the bark, from which non-fermentable fibers are extracted,” says Jeff Morton, international technical support at Agromed Austria GmbH, explaining the makeup of Opticell. “In addition, we utilize fibers from the bark and the cambium, the growing part of the tree, which are fermentable as they contain more active elements.”

While both of these types of lignocellulose have physical effect in the GIT of the bird, the fermentable parts also promote the growth of butyric acid producing bacterial species.

“Poultry consuming this lignocellulose product have been shown to have a healthy gut microflora,” Morton says. “The resulting increase in butyric acid, which is absorbed in the large intestine, improves gut health.”

By promoting the growth of beneficial bacteria, there is less food available for pathogenic species and at the same time decreasing the pH of the GIT reduces their numbers. Butyric acid is also a fuel source for colonocytes, which draw water out of the colon – feces and litter are therefore drier.

The use of lignocellulose products in diets for free-range laying hens is becoming increasingly popular.

“We have a lot of free-range egg producer customers and some of those request fiber additives in their diets,” says Martin Humphrey, director of Humphrey Feeds & Pullets, a poultry feed producer in the U.K. “Those who use them swear by them, reporting that they find the birds calmer.”

“Using these products significantly changes the physical presentation of a layer’s mash,” Humphrey says. “By increasing the volume of the diet, they are seen to eat slower and therefore they will spend longer at the feed track.”

As well as keeping hens occupied for longer, it is thought that this effect may also benefit the bird’s digestive system. The understanding is that these additives are fulfilling the bird’s need for fiber and therefore they don’t need to seek it out from sources such as feathers.

As well as providing broiler breeders with an important source of fiber, the use of fibrous ingredients can help to prolong the time the birds take to eat a restricted ration, improving satiety. As for layers, it would also help to alleviate behavioral issues.

A trial compared the effect of diluting a diet with different fiber sources on the performance of broiler breeders. The addition of cellulose increased egg production as a percentage and in terms of eggs laid per hen. Neither cottonseed meal nor pectin significantly improved egg production over the control. The conclusion was that diluting the diet in itself didn’t improve performance, but supplying a 100 percent insoluble fiber source did.

Fiber additives are included in diets for broilers to promote gut health and performance. In such fast-growing birds, these parameters are particularly important to optimize efficiency. Trial results show that the addition of lignocellulose (0.8 to 0.6 percent on top between 1 and 21 days of age) resulted in a 30-point improvement in European Broiler Index (EBI).

Insoluble fibers are also known to increase the dry matter of feces and hence the litter – in this trial by 32 percent. In so doing ,they may reduce the incidence of footpad dermatitis and breast blisters, etc.

One of the benefits to nutritionists of using a fiber additive is the low inclusion rate. Doses for specific products, class of poultry or age of animal vary; but are generally between 0.5 and 1.5 percent. Also, the form and content of the products is specified, consistent and safe. They are also guaranteed free from mycotoxins and other contaminants.

By fulfilling the inherent need for fiber in poultry, these products benefit key welfare markers in layers and breeders: feathering and satiety. A more favorable gut microflora will help to optimize health and performance. Changes within the GIT result in improved litter quality, and reduced ammonia emissions are also reported.

Such additives, in comparison with high-fiber ingredients, may even improve protein and amino acid digestibility. This could contribute to the increase in performance seen in different classes of poultry. For example, in broilers the addition of a fiber additive resulted in a 1:12 return on investment.

By being nutrient independent, lignocellulose additives are able to provide a standardized insoluble fiber component for poultry diets.

The use of Allium hookeri (AH) root could boost the weight gain of broilers and support antioxidant production without the use of antibiotics, say researchers.