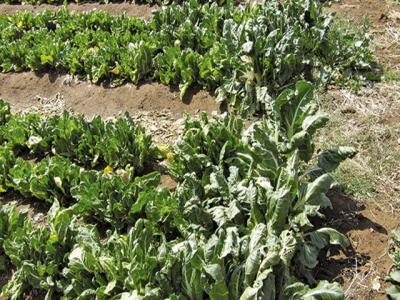 An integrated approach to controlling cyst eelworm usually produces the best results, but using a trap crop is perhaps the single most important method.

A land of oil radish ready to be incorporated into the soil. Photo: Bill Kerr

The two major problems with cyst eelworm control is that the young larvae are encased in tough cysts which protect them from most chemicals, and they hatch over a long period. The secret to reducing their numbers is therefore to coax them out of the cysts and prevent them from breeding.

A mass emergence from cysts usually occurs when the larvae detect exudates (fluid discharge) from the roots of host crops. This happens when the roots grow near to the cysts in favourable temperatures.Researchers have used this knowledge to select varieties that produce such exudates that prevent females from developing in the roots. Such ‘trap crops’ include oil radish and mustard. Although more effective varieties have been developed, oil radish is still preferred as it has a deep tap root system and provides more biomass to benefit the soil.

Mustards are more drought-tolerant and therefore popular in some overseas countries where there is no irrigation and enough rain to grow mustard, but insufficient rainfall to grow oil radish.

The principle of trap crops

The J2 larvae (see last week’s issue) enter the root of the trap crop but the females cannot develop the giant cells they need to supply nutrition to enter a reproductive stage and develop eggs. This produces a break in the life cycle. When trap crops are used properly, a cyst eelworm population can be reduced between 80% and 92%. Reports from the Netherlands mention a 95% reduction in eelworm.

Certain conditions are required to obtain optimal results. Because planting a trap crop means losing a normal crop, some farmers plant at a time they consider more convenient and economical. The trouble, though, is that the time selected may not offer the ideal conditions for the best results.

To be most effective, the soil temperature must be between 15°C and 25°C for six to eight weeks. A few eelworms may emerge at 5°C and more at 10°C, but mass emergence commences only when the temperature reaches 15°C. On the Highveld, planting can start in July, as growth will initially be slow, but the duration of the trap crop will still allow for sufficient growth when the soil temperature is high enough for the farmer’s purposes.

By the time soil temperature is optimal, the root system will be well established. Often, with early spring-planted crops, the price tends to be low at marketing time, so this may be the most economical time to plant.

The benefits of uniform seeding

Taking into account the expense of seed, planting and irrigation, a farmer should plant only when he gets maximum benefit from the trap crop. As mentioned, oil radish is by far the most commonly used trap crop. Its roots can penetrate quite deep and break up hard layers in the soil. The seed is planted at 25kg/ha on a fairly fine seedbed.

Uniform seeding is necessary for the best control and preventing host weeds from surviving in the gaps. A specialised planter is available for this. There is also a private contractor available on the Highveld who does seeding professionally; readers who would like to make use of this service may contact me for details.

Apart from helping to control cyst eelworm, oil radish offers another significant benefit: it serves as a green manure crop. When worked into the soil, it dramatically increases population of beneficial soil organisms, helps to build soil structure and adds humus.

Prolonging the life of the crop will expose the nematodes to the exudates for as long as possible. To do this, slash the crop at flowering and allow it to re-grow. Do not overdo it, however; slashing low down will set the plants back too much.

Nitrogen procedure for a cabbage crop

Last week I mentioned how important it is to have sufficient nitrogen in the seedling and growing medium. The procedure needs to be maintained from here on

Farmers tend to accept the seedlings they’re given and don’t pay much attention to what sort of condition they’re in.

Spacing cabbages for the correct size

I’m often asked what the correct spacing should be when planting cabbages, as though there was only one answer. There’s more to spacing than just setting out

Blackleg is a fungal disease that affects cruciferous crops and can do a lot of damage. Look out for it and take precautions so you won’t get caught out.

Seed Saving 101: 10 Things to Know If You Want to Start Saving Seeds

As your garden starts producing fruit, keep this information in mind if you want to start saving seeds.